The Fender Esquire is often forgotten and overlooked but it had a pivotal role in the success of Fender and the Telecaster (originally know as the Broadcaster). It was the first solid body electric guitar – ever!

And the far more famous Telecaster came from the Esquire. So it deserves its place in the history books as an important part of Fenders story. 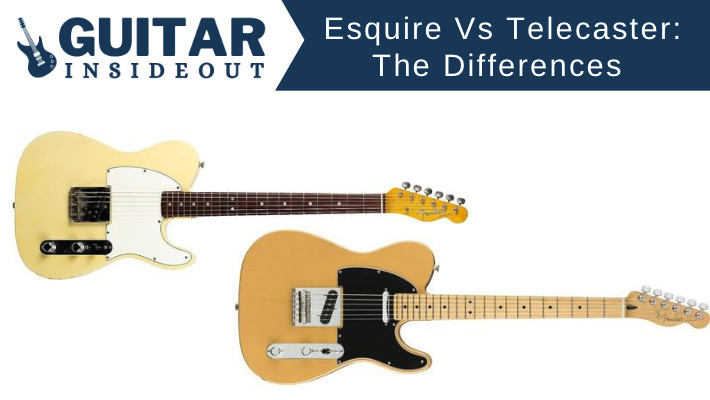 But because of the popularity of the Telecaster you may not be as familiar with the Esquire. And you might be wondering what the difference is between the two guitars.

While they are similar guitars they each have their unique sound and feel with both giving different tones. And one or the other may be a better choice depending on which style or genres of music you’re playing.

So let’s look at the differences between the Esquire and Telecaster, see the how they compare, what they’re good at and how to decide which will be best to you.

Main Differences Between Esquire vs Telecaster

The Main Differences Between Esquire vs Telecaster are:

The body and neck of the Esquire is virtually identical to a Telecaster though. They both have a 25.5 inch scale length and a 1.65 inch nut width.

So in terms of playability they will be very similar. How they’re setup will be a bigger factor in the way in which they play.

It’s the difference in tone that really sets them apart. That’s what you should be thinking about when deciding if a Tele or Esquire is more suited to you.

So let’s dig deeper into those differences.

As the Telecaster is basically just an Esquire with a neck pickup the body shape and neck size are exactly the same.

Where they do differ though is the wood used. Esquire bodies have traditionally been made from swamp ash (or occasionally pine) whereas different Telecaster models have been made from ash, alder, basswood, poplar and more.

The neck on Esquires were made from maple and the fretboard either maple or rosewood. Rosewood is no longer used due to it becoming endangered so the modern reissues of the Esquire are all maple fretboards.

Telecaster necks are also made from maple and the fretboards either rosewood or maple. Unlike the Esquire though rosewood fretboards have been replaced with pau ferro instead.

Maple necks tend to have a little more snap and bite as opposed to pau ferro or rosewood which give a rounder and smooth sound. 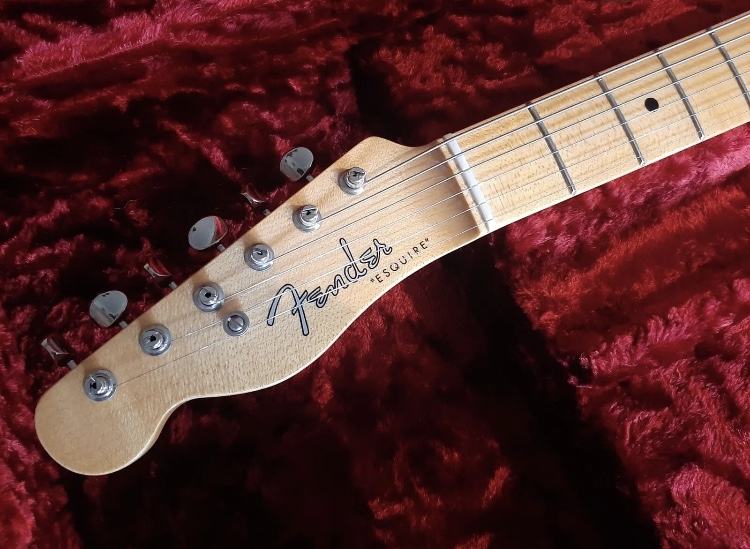 The major difference between the Esquire and Telecaster is the number of pickups. The Esquire is known for its simplicity and single bridge pickup while the Telecaster of course has the two pickups: one at the bridge and one at the neck.

Esquires only come with single coil pickups but Telecasters can have different configurations of humbuckers and single coils.

By having no neck pickup and only one at the bridge directly affects the tone of the Esquire. 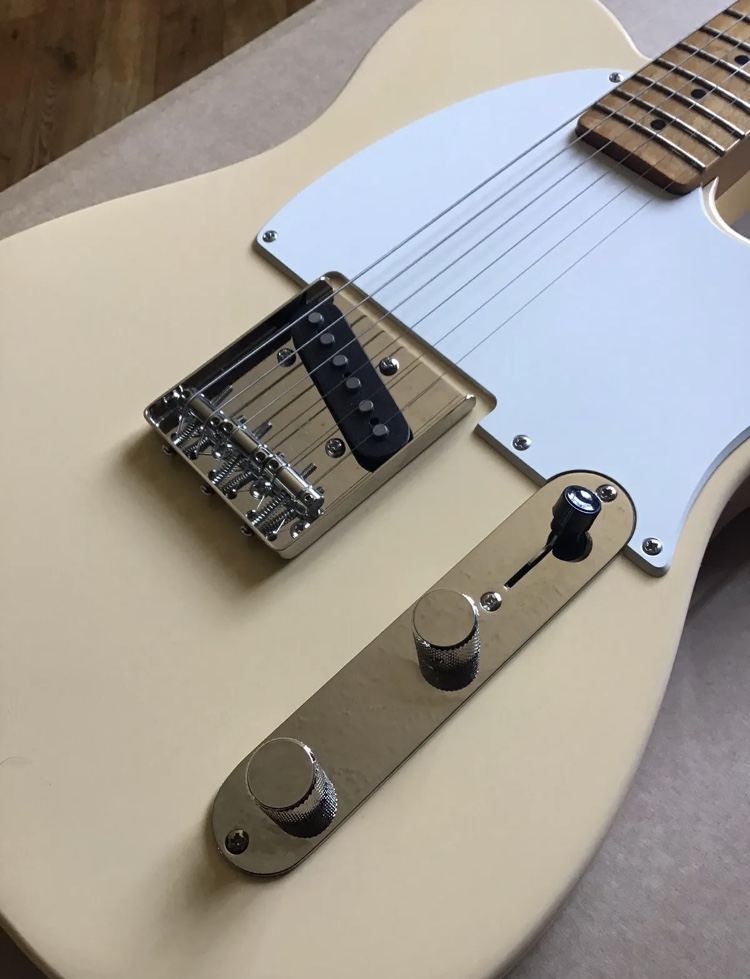 One of the main reasons that Esquires have a distinctive tone is the way the pickup selector works with just one pickup. Even though it only has a single pickup the three-way switch you find on two pickup guitars was kept.

So, how does a pickup selector switch work on a guitar with only one pickup? Well instead of switching between pickups it’s more of a ‘tone shaping’ switch for that single bridge pickup.

Looking at how each position works:

The 3rd position was fiddled with a lot by Fender over the years until production of the Esquire ended in 1969. The dark and bass heavy tones weren’t very popular so Fender tried changing the capacitors and pots but nothing really worked (although later on the 3rd position would prove to be just what some jazz players were looking for).

In comparison a Telecaster is very straightforward. It’s 3 way selector works how it was intended – switching between bridge, neck and combined.

Due to the tonewoods used in the construction of Esquires, the bridge only pickup and the unique wiring of that pickup they have a distinctive tone. Especially when compared to a Telecaster. Even more so considering their similarities.

This in turn creates a very bright, percussive tone with a sharp attack and richer harmonic overtones. Compared to a Telecaster it’s definitely more responsive and aggressive.

Then the wiring for the bridge pickup and the tone shaping selector switch gives the Esquire more options that a Telecaster doesn’t have. You might think that only having one pickup would limit the Esquires versatility when compared to a Tele but the range of tones you can get are really surprising.

Even though Esquires don’t have the same popularity or notoriety as Stratocasters and Telecasters they have been played by some amazing guitarists on some legendary songs: 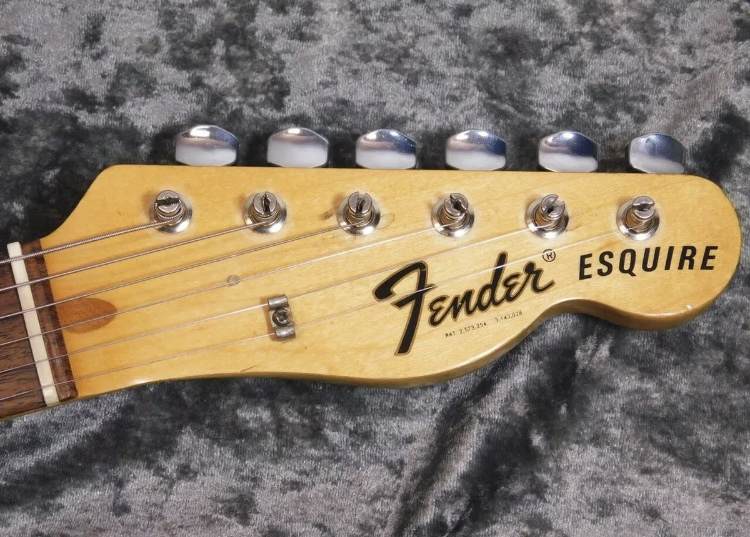 If that was a lot to take in then below is a quick overview of the differences between the Esquire and Telecaster:

Which is Best for You?

You may be wondering why you would want what is virtually the same guitar but with one less pickup and so presumably fewer tone options? On paper the Esquire is just a slightly poorer version of a Telecaster.

But that isn’t necessarily true or fair. The appeal of the Esquire lies in its simplicity.

Many guitarists like the fact that the limited options of one pickup forces them to work harder when playing. You find different ways to get the tones you’re searching for with just your hands rather than relying on the ability to flip a switch and change pickups.

You grow a better understanding of how the instrument works and what you need to do to fully manipulate it into producing the response you want. You end up learning more about what is possible with such a simple guitar.

And there are some who just like simplicity, full stop. No messing around with too many controls or pickups – just plug in and play.

That’s not to say the Telecaster isn’t a great guitar! Or any guitar with more pickup options for that matter.

It all comes down to personal preference. Which is why it’s always better to try a guitar out before making a decision.

You may think that an Esquire is perfect for what you want. Then you actually try one and realize you miss the neck pickup. Or it’s tone just doesn’t do it for you.

So it’s always recommended you try the guitar first and see which one feels, plays and sounds right for you.

History of the Esquire

Leo Fender wanted to create an electric style spanish guitar. One that didn’t have the feedback issues that semi acoustic guitars did.

So in 1949, with the help of George Fullerton, he set about designing and making the first solid body electric guitar. The result was a prototype version of the Esquire – with a single pickup from Fender’s Champion lap steel guitar, no truss rod through the neck and with a neck wider at the nut.

This would be refined over the next few months with the nut being reduced in size and a 2nd, smaller pickup installed at the neck.

The first Esquire was produced in 1950 and soon after the dual pickup version was made. The 2 Pickup guitar was originally named the Broadcaster, but Fender were sued by Gretsch who had a banjo and drum kit with very similar name (Broadkaster) and soon after it was renamed the Telecaster.

This resulted in manufacturing of the Esquire being temporarily put on hold before it was reintroduced with a truss rod. The idea was the Esquire would be a cheaper version of the Telecaster due to its single pickup.

But soon after Fender introduced the likes of the Duo Sonic/Musicmaster and Mustang which were cheaper and aimed at the student or beginner players. Subsequently sales of the Esquire continued to decline until it was discontinued in 1969.

It wasn’t until 1986 that Fender Japan decided to start producing Esquires again, this time under the Squier brand. Since then there have been reissued, most notably Custom Shop versions, as well as a Squier Classic Vibe Esquire.

Is the Esquire or Telecaster easier to play?

As they are so similar it’s difficult to say which is the easier to play. The only real differences is the neck radius on some Telecasters is 9.5 inch compared to the Esquires 7.25.

But it’s really the tone difference that sets them apart rather than how they play.

Which Guitar Came First, the Esquire or the Telecaster?

The Esquire came a few months before the Telecaster. Both were produced in 1950 but the Esquire was released those few months ahead of the Broadcaster, soon renamed Telecaster.

What Does the Pickup Selector do on an Esquire?

How many pickups does an Esquire have?

Just one – a single coil pickup in the bridge position. It is routed for a pickup at the neck so you can modify it and add one but as standard Esquires come with just one pickup.

There are so many similarities between the Fender Esquire and Telecaster that it makes deciding between them tricky. But the tonal differences and simplicity are what sets the two apart.

If you can then try them side by side to see which sounds better to your ears and whether you feel the lack of neck pick-up holds the Esquire back. You’ll probably find one stands out to you pretty quickly.

Whichever you go for though you will be getting a top guitar. The Telecaster is where it all started and is one of the most famous guitars of all time, and while the Esquire doesn’t get the credit it probably deserves there’s no doubting it’s quality.