What do you do if you love the Mesa Boogie Dual Rectifier sound but can’t afford the real thing? Or want to get Mesa Boogie tones at sensible volume?

You buy the Mesa Boogie V-Twin pedal, of course! At least that’s what I did, anyway.

As much as I wanted one I thought trying to use a Dual Rectifier at home/in my bedroom would be tricky. A 100 watt monster amp for quiet practice didn’t seem practical.

So when I discovered the V Twin, a two tube preamp pedal, I had to give it a try.

Now after a few years of use I’m well placed to do a full rundown and review of it. 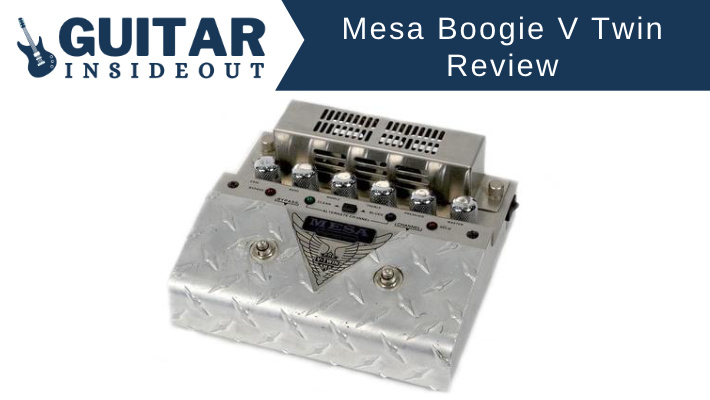 So if you’re interested in learning more about the Mesa Boogie V Twin pedal or considering buying one then hopefully I can help you with how it’s made, works and sounds.

So, the Mesa Boogie V Twin is an all tube preamp pedal that works as a either a regular preamp, a straightforward overdrive/distortion pedal, or you can use the emulated speaker out for recording straight into the mixer or playing with headphones.

It uses 2 x 12AX7 tubes, has 2 channels with a total of 3 modes, a bypass switch, EQ and gain section, external switching inputs and a speaker emulated out.

It was in production between 1993-2005 and had since been discontinued. As far as I’m aware Mesa Boogie haven’t released anything similar since and have focused mostly on amps.

It’s decades now since it was first released but at the time it was considered to be cutting edge with some rare features. 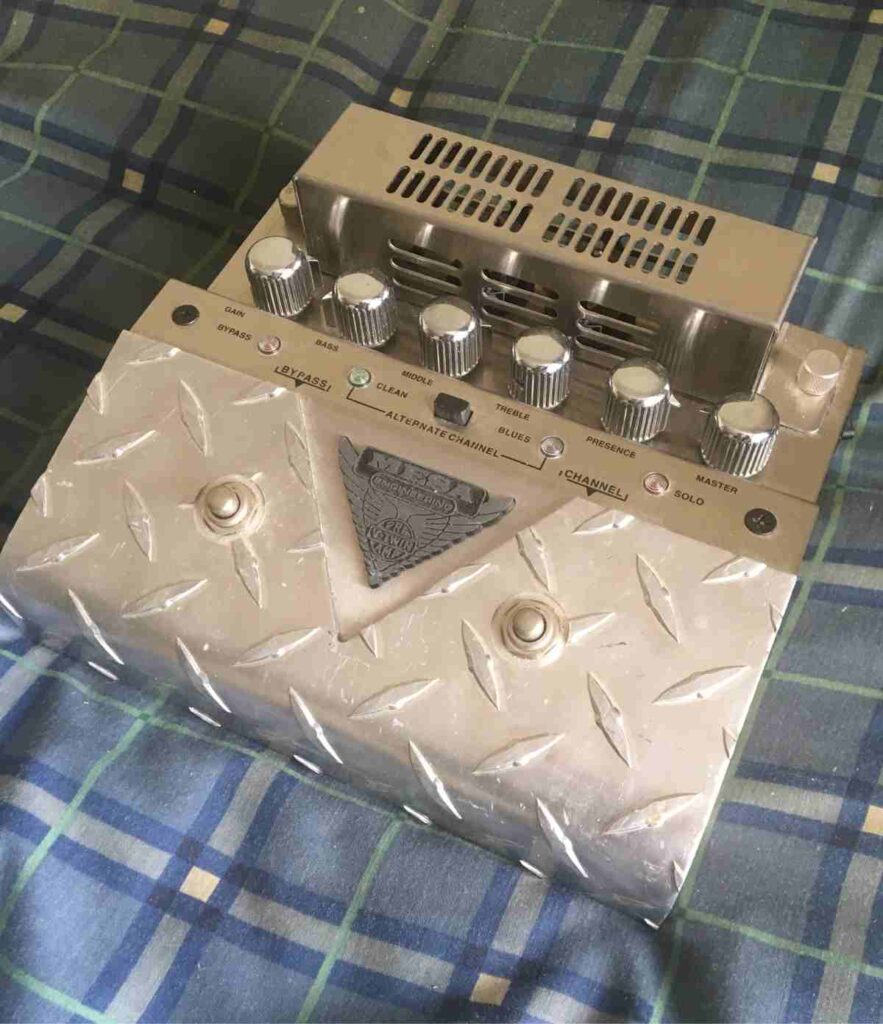 The full specs for the V Twin are: 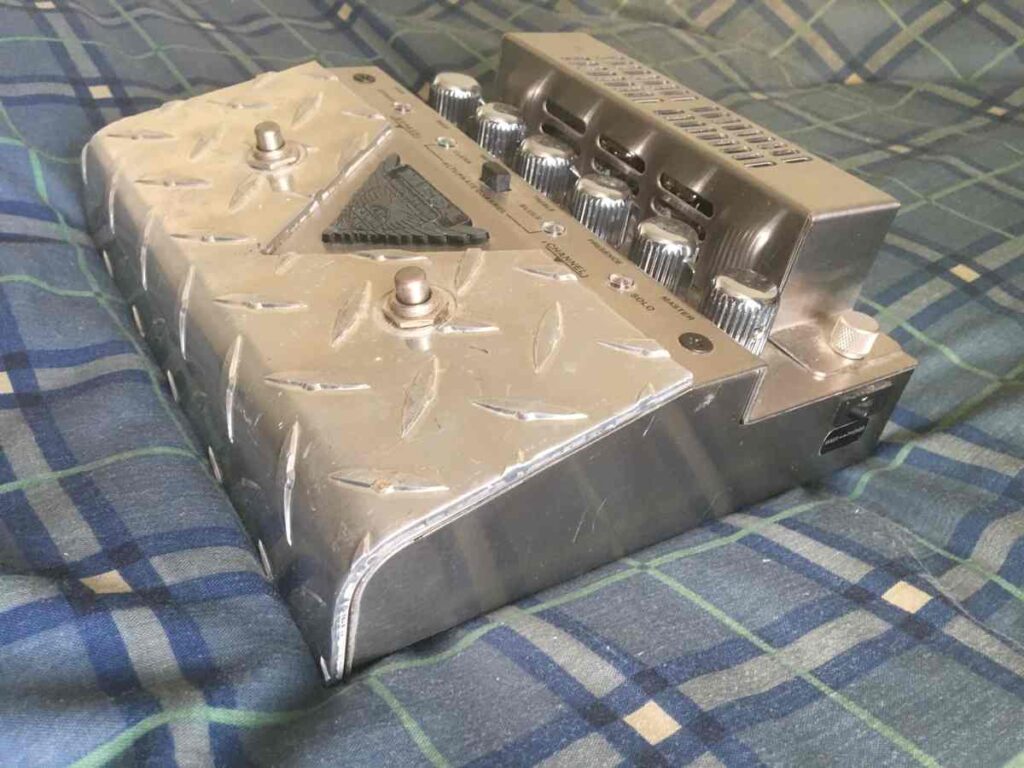 Mesa obviously wanted the V Twin to look like the Rectifier series of amps. Which makes sense seeing as that’s what it was based on.

So it’s been styled that way with the silver steel ‘truck ramp’ you find over the front of the Rectifiers. But honestly, it’s ugly. Just a big, square, metal slab.

It’s massive as well. It measures 8 inches wide by 7 inches long and just over 2 inches high/deep. If you’re thinking of including it on your pedal board then you’ll almost certainly need a bigger one.

On the plus side changing the tubes is very easy. You only have to unscrew two screws and remove the grill shield and there they are. 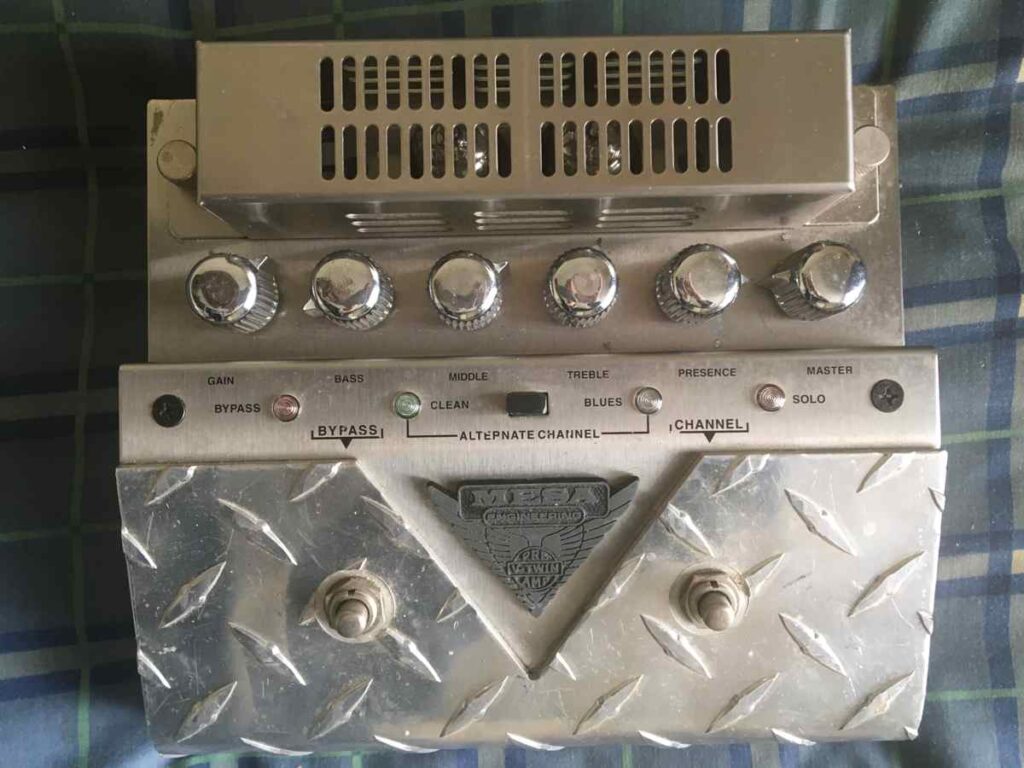 The V Twin is built like a tank! Seriously, it’s virtually indestructible.

It’s all metal and weighs a tonne. Not literally but frankly it doesn’t feel like it’s far off.

It’s weighty by most standards but for a pedal it is ridiculously heavy. Combine that with its size and it makes it pretty cumbersome if you want to use it when playing live. Big, awkward and heavy – not the user friendly experience you would want from a guitar pedal.

Alright, it may not be like trying to transport a 4×12 cab. But still, for what it is it takes up a massive amount of space and is a huge unit to carry. Especially when so many pedals have mini versions now that will comfortably fit in your pocket.

So, how much does the Mesa Boogie V Twin Pedal weigh? It weighs 4.6lbs, or just over 2kg. To put this into comparison, most BOSS pedals weigh a little under 1lbs (0.37kg). So the V Twin is almost 5 times heavier.

But that weight does mean it’s sturdy. And when I say sturdy I really mean it’ll survive pretty much anything. It is quite reassuring to know that whatever you throw at it – quite literally – you’ve little chance of doing any real damage.

Also, I can say with the greatest authority that it’s very painful if you catch or stub your toe on it. So I’d advise against doing that.

The other issue with the way it’s built is the power socket. We’ll put aside the fact that it needs an annoying and non standard 12V power supply – what’s worse is that the power jack is so poorly placed.

On top of that poor placement the socket is really weak and easy to break. For a unit that seems to have been built with sturdiness in mind it’s odd how the power socket, something extremely important, was left so weak. 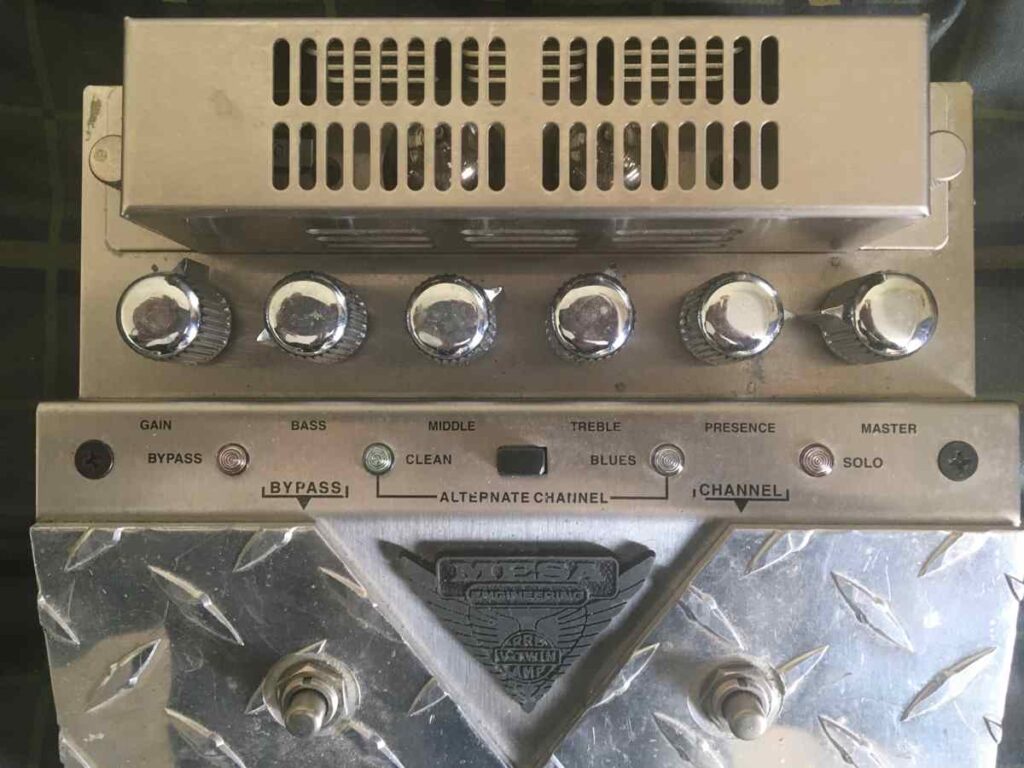 So, we’ve established it’s built to withstand anything and it was probably designed by someone without the gift of sight. Let’s look at what it offers.

It’s a two channel preamp with ‘Solo’ on one channel and ‘Blues’ or ‘Clean’ on the 2nd channel. Solo is very much a high gain lead sound whereas Blues and Clean are fairly self explanatory.

Slightly annoyingly you can’t switch between all 3. The standard setting is you can footswitch between the Solo channel and Blues or Clean.

If you want to footswitch between Blues and Clean you have to adjust a little switch underneath the pedal behind a screwed plate (this is only present on later versions. Earlier produced ones don’t have that switch). If you know you’re not going to use the high gain Solo channel then that’s fine – you can set the switch and forget about it.

If you wanted to use all 3 though then you’re out of luck. At least without a scrabbling around under the pedal with a screwdriver. 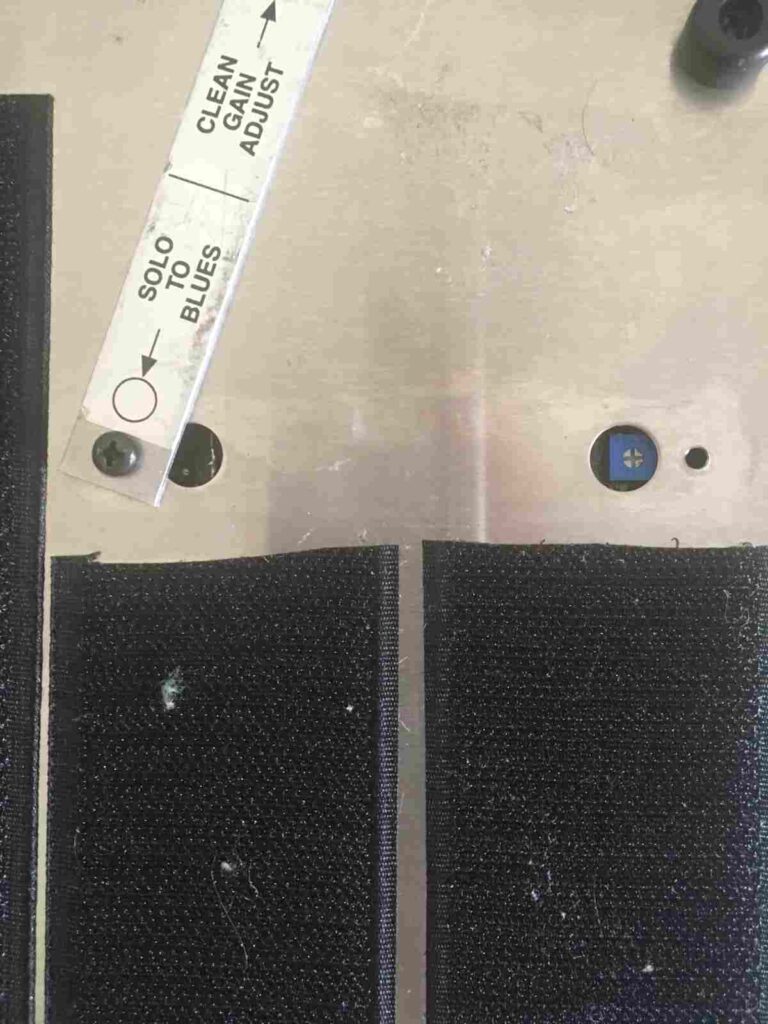 Weirdly it doesn’t reassign the LED’s to the correct channels when you set the switch. So the red LED that indicates the Solo channel actually then indicates the Blues channel. It can all get a bit confusing.

It features 3 outputs: Mixer/Headphones, Power Amp and Guitar Amp. You can switch between the mixer and headphones out with a little switch on the side.

A nice touch is that if you set it to mixer you can actually drive a speaker cabinet from there. It’s a speaker emulated circuit and works with 8 or 16 ohm cabs.

The 3 input sockets are: Instrument, External Select and External Bypass. So one for your guitar and the other two are for external footswitches if you want to use the select and bypass on the V Twin but from your own switches.

On top of that you’ve got a four band EQ of bass, middle, treble and presence, as well as gain and a master volume.

A handy pointer – the two valves it uses are independent. Which means you can experiment with different ones for the different channels and mix and match. The right is for Clean, the left for Blues and Solo.

Overall it’s extremely versatile: put it in front of an amp, use it as a preamp into an FX loop, practice silently with headphones or go straight to the board when recording. 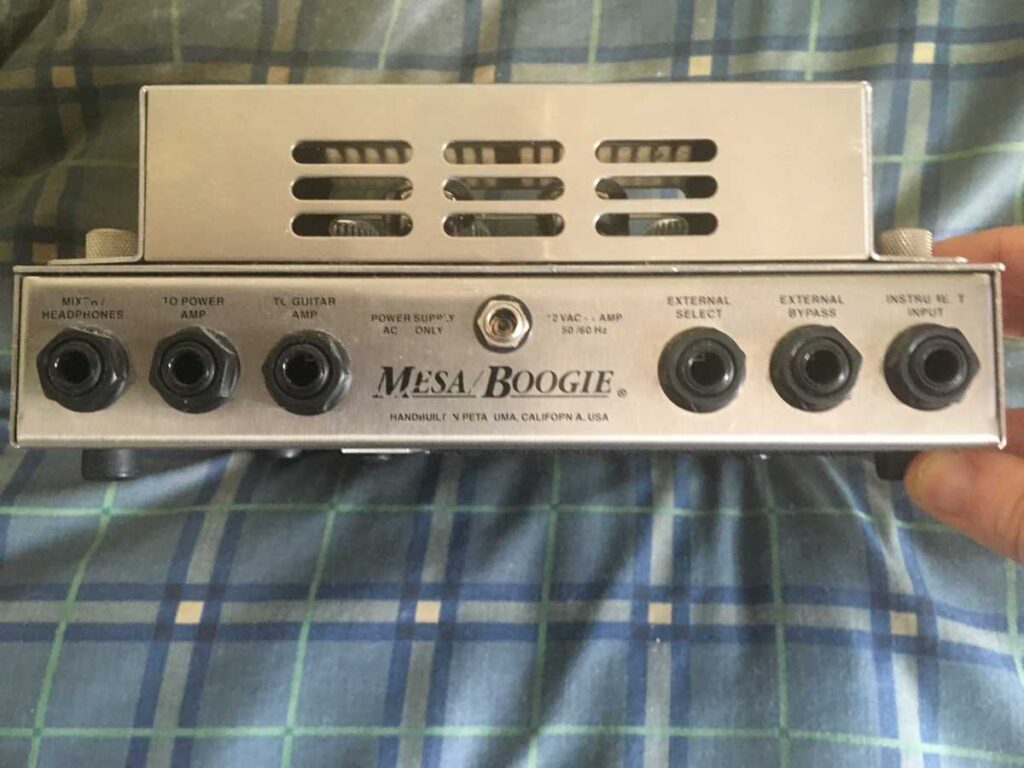 So, up to this point I’ve described it as heavy, ugly, awkward and with annoying or confusing features. But none of that matters because it sounds amazing!

All is forgiven when you begin using it.

I always thought I was going to love the gain the V Twin produced but I didn’t expect to be blown away by the clean channel like I was. It’s not particularly Fender-like but it’s so warm, full and thick.

You can also use it as a clean boost which works great. It really adds that extra bit of note articulation and clarity.

The Blues channel is also a total delight. I know that Rectifiers developed a bit of an unwanted reputation after being the amp of choice for all the early 2000’s nu-metal. And I think that unfairly put a lot of people off.

I say that because you could happily forget the high gain of the Solo channel on the V Twin and just switch between Clean and Blues. The Blues channel has a lovely crunch and does a sort of softer lead sound, almost mellow.

Its definitely warmer overall than the full throated Recto’s.

Moving to the Solo channel and it has a huge amount of gain and sustain. It’s so thick and chunky, just the way I love it. A proper lead guitar tone.

If you want the really modern metal sounds though you will probably need another boost or overdrive in front of the V Twin to tighten it up. It just lacks a little bit of gain and is too loose on its own. A TS9 does the job perfectly though.

I’ve seen people complain it can get a bit muddy but I haven’t experienced that myself.

This is a short but good video that demonstrates how it sounds without any studio tricks:

So, would I recommend the Mesa Boogie V Twin pedal? Well, it’s tricky.

With any bit of a gear, be that a guitar, amp or pedal, it’s always best to try it first. But as the V Twin was discontinued years ago it’s going to be difficult to demo one.

Which means you’re going to have to buy 2nd hand and take a chance. And that of course means there’s every possibility you’ll hate it.

Plus I’ve talked about the many drawbacks here, and there are many – it’s enormous, heavy, awkward etc.

If you want something small and lightweight it’s definitely out. Don’t have much room on your pedalboard? Forget it. There’s the annoying power supply, stupidly placed switch for changing the channel switching.. it goes on.

But I genuinely love the sounds you get from it. It does exactly what I want and because of that I’m willing to forgive or overlook the other issues. It’s a trade off I’m able to live with it.

You might not though. So do your research first. Thankfully they tend to retain their value so if you pick one up you’ve got a good chance of reselling it on eBay and getting your money back.

I think it’s a great piece of gear though. It sounds fantastic, is virtually indestructible and has so much versatility. I won’t be selling mine any time soon.