You may have noticed that guitars have colored bits of plastic attached to their bodies. They tend to be below the strings and can come in a variety of shapes and sizes.

These are pickguards. And they are designed to do as their name says: guard the guitar from picks. When you strum with a pick it can catch and scratch on the body of the guitar. 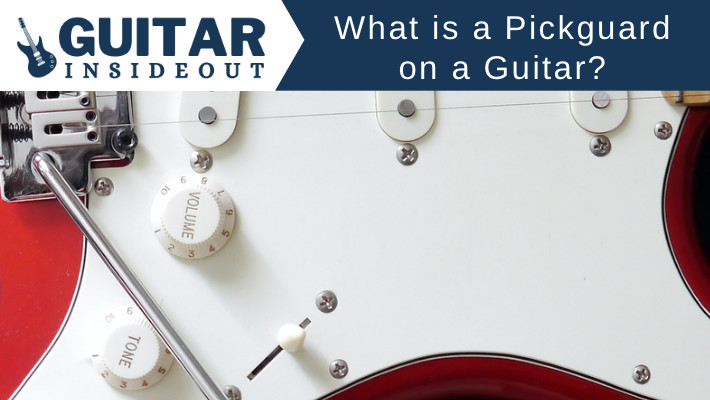 Whilst not the most essential part of the guitar a pickguard does play a big role in how guitars look. For a more in-depth look at what a pickguard does, where it’s found on a guitar, what’s it made from and whether you can replace it (amongst more) then keep reading.

What is a Guitar Pickguard

A pickguard on a guitar is a piece of material, usually plastic, that is screwed on to the body. It is found on electric and acoustic guitars but not classical as they were designed to be played with the fingers, not a pick.

The main reason for a pickguard is protection – it stops the finish of the guitar getting marked when playing with a pick/plectrum. It also acts as decoration on a guitar.

The pickguard is sometimes known as a scratchguard or scratchplate.

Where is a Pickguard on a Guitar

Whilst the pickguard is roughly in the same position different types of guitars do have different places for their pickguards. Once you know what a pickguard looks like it’s very easy to identify them on any guitar.

The Stratocaster is arguably the most famous guitar. It has a unique pickguard that covers a large portion of the body and holds the pickups in place.

The Telecaster is the other most famous Fender guitar. It’s pickguard covers roughly half of the body nearest to the neck.

Gibson Les Paul’s have a floating pickguard that isn’t attached directly to the body but floats over it. It’s a much smaller pickguard than Fenders. 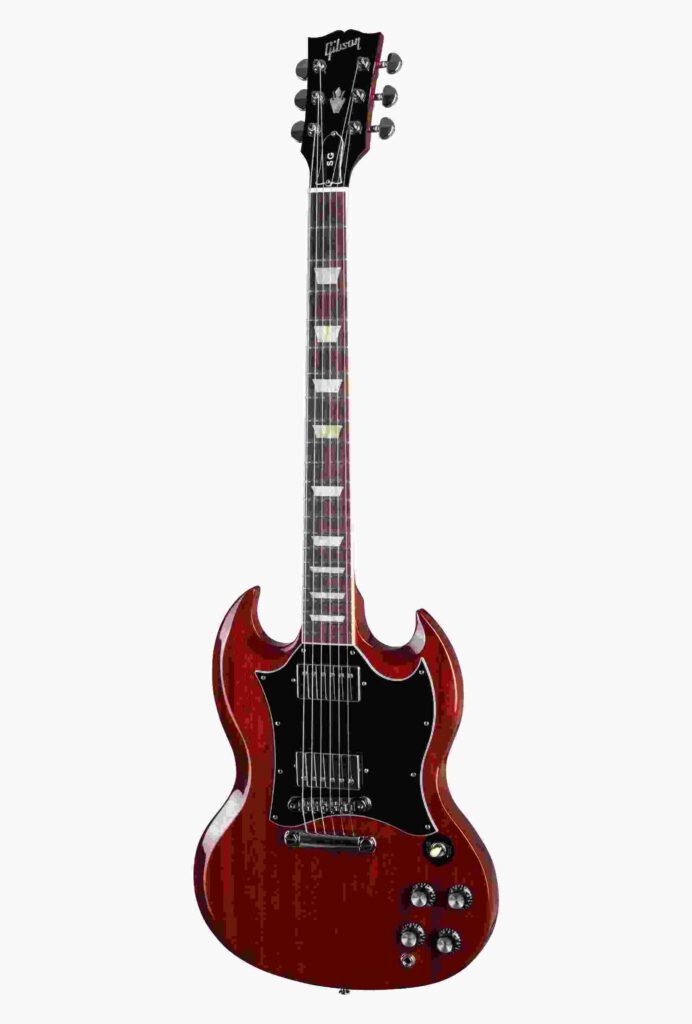 The Gibson SG has a very unique pickguard that is often referred to as ‘batwing’. Because it looks like the wings of a bat!

Many Ibanez guitars don’t have pickguards but the RG series does. It has a similar pickguard to the Stratocaster.

Acoustic guitar pickguards are usually smaller than electric guitars and are glued in place rather than screwed. 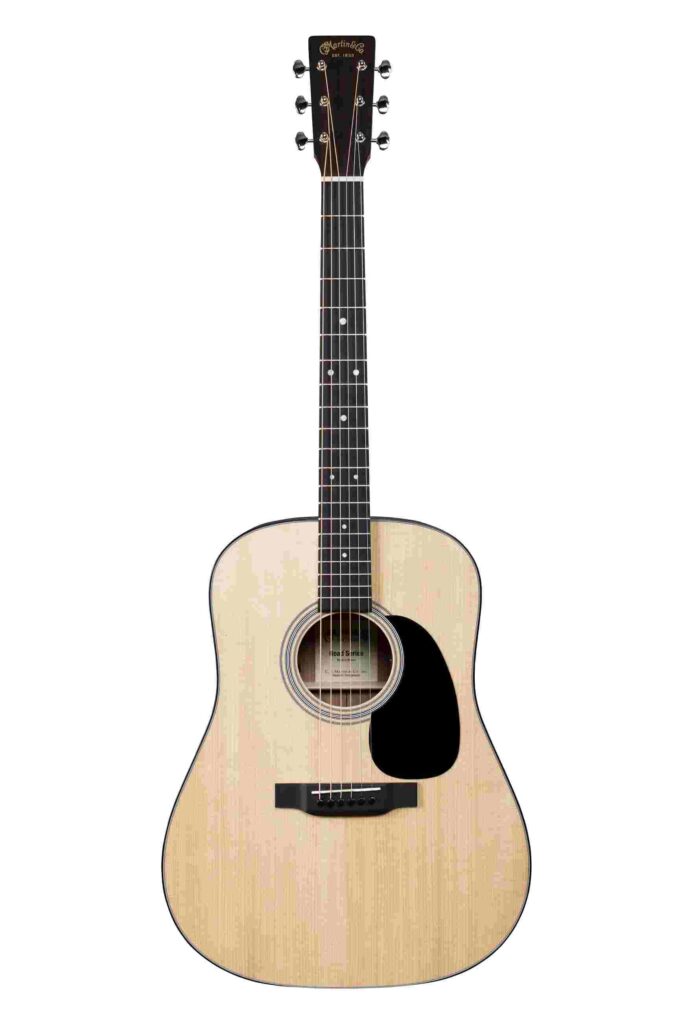 There are many more guitar brands but that should give you an idea of where the pickguards are found on different types and styles.

What does a Pickguard Do?

The purpose of a pickguard is to protect the finish of the guitar from getting scratched when playing with a plectrum.

When you strum with a pick it’s not uncommon for the pick to hit the body of the guitar below the strings. In the past guitar finishes were weaker and more likely to get scratched. So pickguards were used to stop the pick from doing any damage.

Over time though the types of finishes used on guitars, especially electric guitars, changed. So now it’s now a lot less likely that hitting the finish with the pick will cause any scratches or marks. Although it does still happen.

Another reason for pickguards is that on certain guitars the pickguard covers the electronics and hides the routing. Without it you would be able to see the wiring for the pickups and pots, which would also make them more vulnerable to getting damaged.

And lastly pickguards make up part of the look of a guitar. Take a Strat or Tele and remove the pickguard – it looks so strange! Maybe that’s because it’s what we are used to but either way most people prefer the look of guitars with pickguards.

So the purpose of the pickguard is mainly protection and decoration. To stop the guitar getting scratched by the pick, guard the electronics and make the guitar look a certain way.

What are Pickguards Made from?

Pickguards are usually made from plastic. Acrylic or PVC are very common nowadays.

In the past celluloid was used in many guitars. It was considered a mistake because over time celluloid shrinks, warping the pickguards on many acoustic guitars or cracking them if they were screwed down on electrics. Also celluloid is very flammable which made it dangerous.

Is a Pickguard Necessary?

As the finishes on guitars are now a lot stronger than they were in the past they are less necessary. But if you have a guitar without a pickguard, or remove one, then you quickly see how important they are.

It won’t take long before for the scratches and marks appear. This is especially true if you are a hard and aggressive strummer. That style of playing gives you a lot less control and invariably leads to the pick hitting the body which will cause scratches and damage to the finish.

Also, and this is more personal preference, most guitars look odd without a pickguard. We are so used to all types of guitars coming with a pickguard that they don’t seem right if it’s missing.

But technically you don’t have to have one. If you don’t the guitar still works the same way and it won’t stop you playing. It’s just most people like the way guitars look with them and prefer not to scratch their guitar if they can avoid it.

Does a Pickguard Affect Tone?

It depends. On an acoustic guitar it can do. If you glue a piece of plastic to the resonating soundboard it’s not a huge shock that it would impact the tone. Acoustics are constructed and use pickguards with this in mind.

On an electric guitar however it’s less straightforward. Some claim that having the pickguard resting directly against the body, like Fender guitars do, affects tone. And that’s why the likes of Gibson chose to go with floating pickguards to reduce the affect it had on tone. But it may be one of those situations where the difference is so minimal you can barely notice.

Can you Replace a Pickguard?

Yes, it’s actually very easy to swap pickguards on a guitar. On an electric guitar all you have to do is unscrew the current one on your guitar and screw the new one in place.

Be sure you buy one that fits the position for pickguards on your guitar! And one that matches the pickup configuration.

The last thing you want is to buy a pickguard and it not fit or be the correct size for your guitar, or one designed for single coils and you have a guitar with humbuckers.

On an acoustic guitar you will need to apply some heat to the pickguard to loosen the glue. Then you just gently lift the pickguard away. If you’re uncomfortable doing this then take your guitar to a luthier who will be able to do it for you.

Do Any Guitars Come Without Pickguards

Virtually all Fender’s and Gibson’s have pickguards though.

Taylor, Lowden and Seagull are just some of the acoustic guitar brands that do guitars without pickguards.

So you should now understand what a pickguard does, what they’re made from and whether one is really necessary.

Much of it comes down to personal preference though. You don’t have to have a pickguard and so it’s more about how important your guitar remain scratch free is. And of course what you like the look of.