Guitar bridges are often talked about as being really important to how a guitar works and sounds. But what is a guitar bridge?

You might be able to identify one but do you know exactly what it does? Or why? 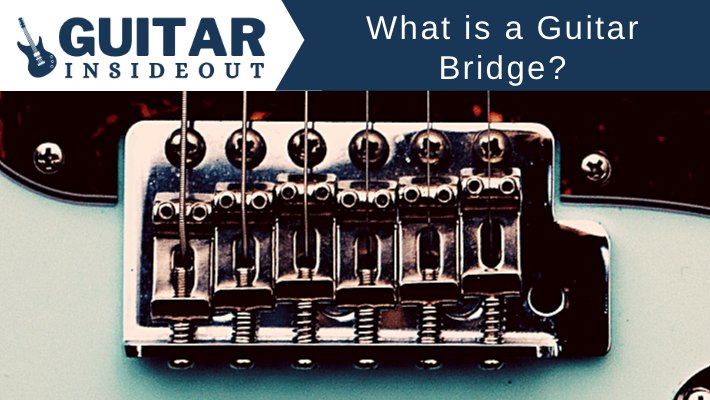 If not then you’re probably interested to know more about the bridge on a guitar. We’re going to take a look at what a guitar bridge is, what it does, what it’s made from and why it’s important.

What is a Guitar Bridge

The bridge on a guitar is the part that supports the strings and transmits the vibrations made by them to either the pickups in an electric guitar or the soundboard in an acoustic. This creates the sound you hear from your guitar when it’s played.

Electric guitar bridges are usually a piece of metal that is screwed to the body of the guitar. It contains all the parts of the bridge – saddles, block etc. and allows for adjustment of individual strings. There though many different types of guitar bridges.

Acoustic guitar bridges support the string saddles and often have bridge pins to hold the strings in place. The bridge itself is glued to the guitar body in acoustic and classical guitars rather than screwed.

A classical guitar has a bridge with a block that the strings go through and are tied behind to secure them in place.

If you’re interested in more about the guitar anatomy and how it works try out guide to the parts of the guitar.

Where is the Guitar Bridge

All guitar bridges are in roughly the same place on guitars. They are found on the body of the guitar near to the end or bout.

But because each type of guitar is different and they use different bridges it can sometimes be a little confusing. If you aren’t sure exactly where the bridge is then the below images should help:

What does a Guitar Bridge do?

The strings on a guitar only make a very small amount of sound when they vibrate. So you need something to transmit that sound they make to somewhere that can amplify it. This is what the bridge does.

In the case of electric guitars it’s the pickups that amplify the sound. So the bridge helps to transmit the vibrations of the strings to the pickups.

In an acoustic guitar the bridge transmits the sound from vibrating strings to the soundboard.

The bridge also plays a role in the intonation and action of the strings. Depending on the type of bridge the strings can be individually or universally adjusted at the bridge – either for their height (i.e. action) or their intonation.

Lastly the bridge is important in keeping the string aligned.

What are Guitar Bridges Made of

Acoustic guitar bridges have 3 main parts: the bridge, bridge saddles and bridge pins. A classical nylon guitar has the bridge and saddles but doesn’t use bridge pins (instead the strings are tied behind a block).

These parts are mostly made from wood. The bridge itself is especially important to have a dense wood to help with the transmitting of the sound.

The saddle is more often made from bone and the bridge pins come in wood or plastic – beware, plastic pins tend to break easily.

Why is a Guitar Bridge Important?

The guitar bridge is so important because it affects tone, playability and sound. Without the bridge

Does a Guitar Need a Bridge?

Yes, without a bridge a guitar the strings have nowhere to go. They need the bridge to be held in place or anchored.

The strings would have no tension and not be able to vibrate and produce any sound without the bridge.

Can a Guitar Bridge be Replaced?

Yes, you can replace broken bridges or swap guitar bridges on both electric and acoustic guitars.

Acoustic guitar bridges tend to be glued to the body. You can buy a new bridge and glue it in place of the old or broken one.

Electric guitar bridges are screwed into the body of the guitar. All you have to is unscrew the one you want to replace and screw in the new one (making sure you’ve got the right type of bridge).

Bridge saddles are a part of the bridge. They work to space the strings as well as transmitting the vibrations of the strings from the bridge to either the soundboard or pickups, depending on the type of guitar.

As part of the bridge they can be adjusted to raise or lower the action or set the intimation.

Does the Guitar Bridge Affect Tone?

The bridge of a guitar can effect the tone. As bridges and their parts are made from different materials they all resonate differently which gives you a different tone.

If you’re not a real audiophile or tone obsessive you may not notice the difference. It isn’t a massive change in tone, but depending on the hardware and materials you can distinguish between different types of bridges and the tones they create.

Does the Bridge Affect Intonation?

Does the Bridge Affect Playability?

As the bridge is directly responsible for adjusting the action of the strings (the height from the fretboard) then the playability is absolutely affected by the bridge. Some prefer certain types of bridges more than others for comfort as well.

When plan muting, for example, some bridges can feel more awkward or less comfortable.

As you’ve now seen the guitar bridge is extremely important in both how the guitar sounds and plays. You can’t have a guitar without one and the type plus what it’s made from has a huge impact on the guitar overall.

If you’re buying a new guitar or replacing the bridge in one you own then you should pay attention to the bridge and how it feels and plays. It makes a big difference and hopefully everything you’ve learned here will help you get your decision right.

1 thought on “What is a Guitar Bridge? A Simple Guide”