Most guitars come with volume and tone controls. But even experienced guitarists can be a bit confused by what the guitar controls do.

You’ll have seen and probably used the knobs on your guitar. But are you absolutely sure you know how to use them properly. Do you fully understand what the tone controls do? 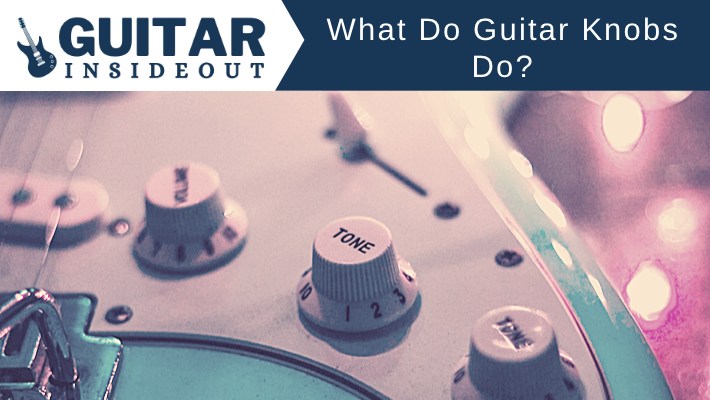 Well if you’re interested in knowing exactly what the guitar control knobs do and how to get the most out of them this guide is for you.

What Do Guitar Knobs Do?

The knobs or controls on a guitar affect the tone, sound and volume the guitar produces. So virtually all electric guitars have a volume and tone control along with a pickup selector switch.

These are all very straightforward: the volume knob controls the level of volume the guitar produces (duh!). The tone control increases or decreases the amount of treble in the signal output from the guitar and the pickup selector switches between the different pickups the guitar has.

But different types of guitars have different configurations of controls. Let’s take a look at the most popular guitars and their control setups. 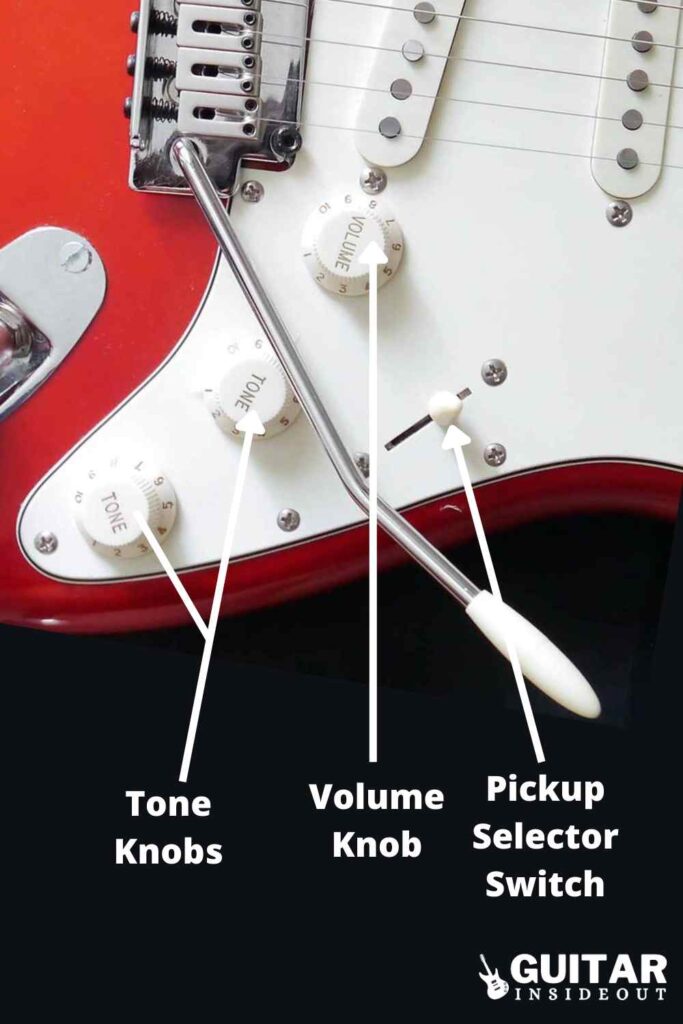 The most well known Fender guitars usually have either one volume control, called a master control, and a tone control knob for both the bridge and neck pickups (these are isolated controllers). Or they have just a single volume and tone control.
Alongside those controls there is the pickup selector switch which looks different to the round knobs. 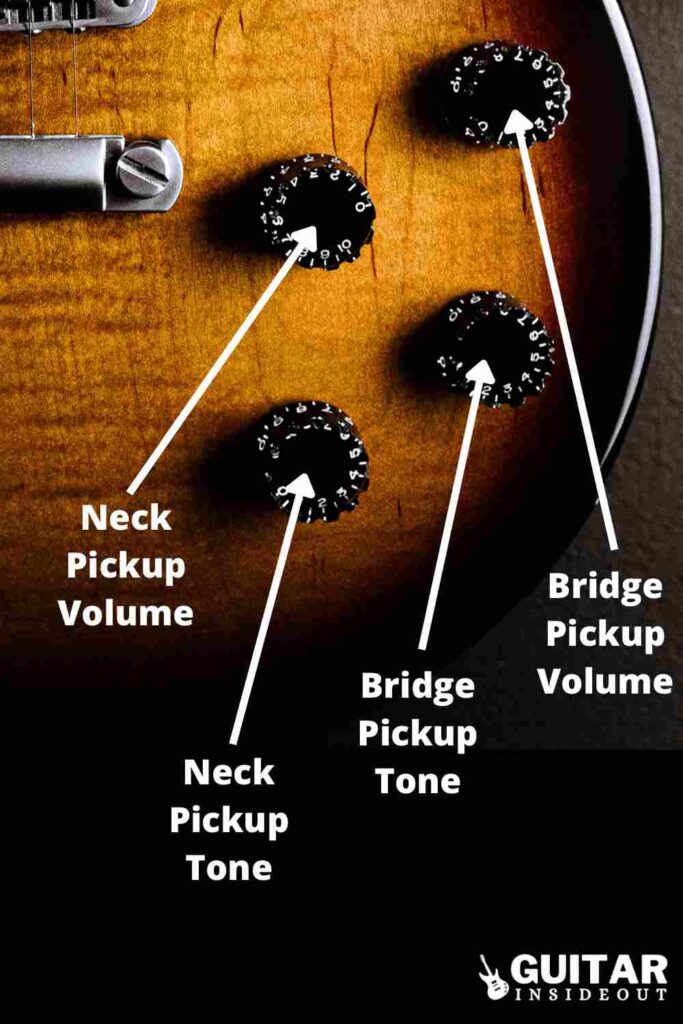 Les Paul’s mostly have 2 volume and 2 tone control knobs. The 2 controls are for each pickup, so you can individually change the volume and tone of either the bridge or neck pickup independently. Again these are isolated controls as opposed to a master control. 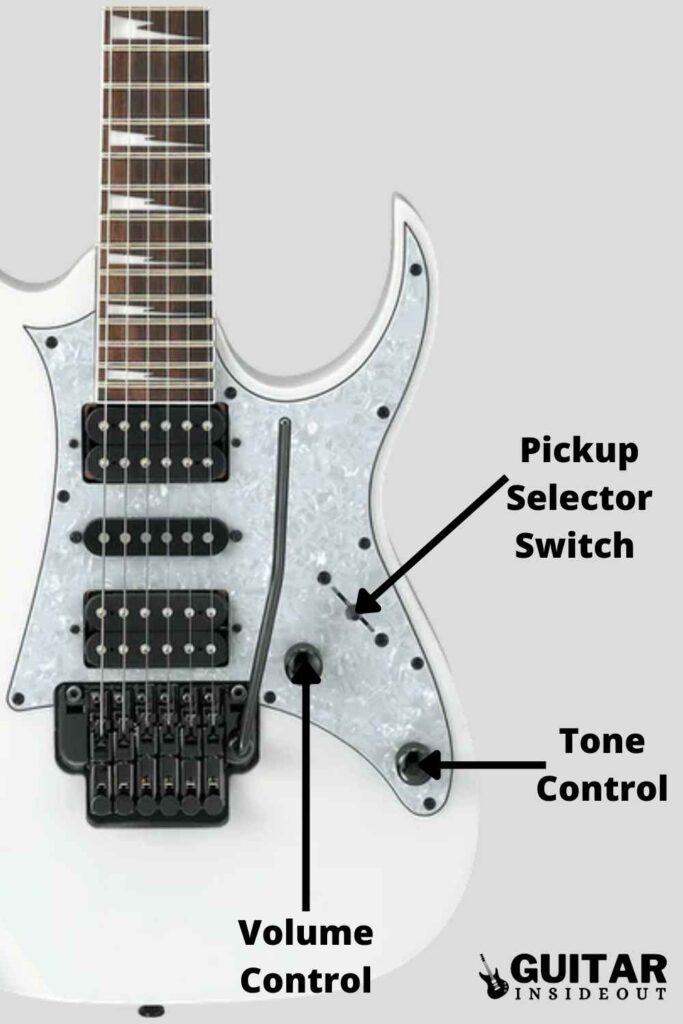 Ibanez guitars tend to have fairly simple controls. Not all stick to the same configuration but the most common is one volume control and one tone control. 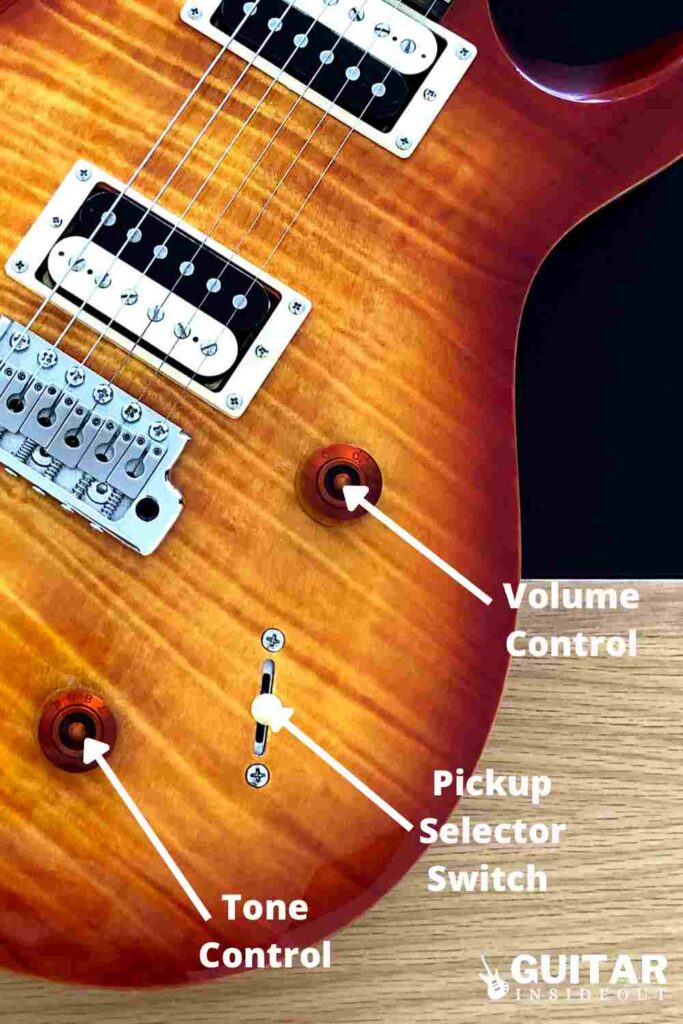 PRS guitars are similar in design to Gibson’s but tend to have a 2 or 3 control configuration. 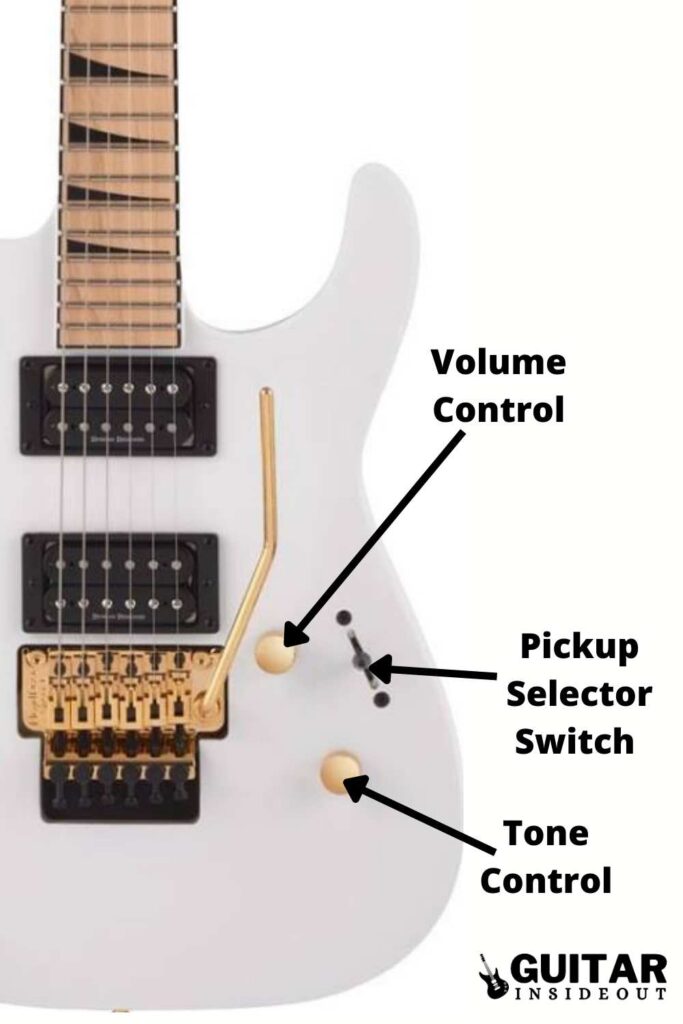 There are many more types of guitars but most will have some variation of the 2, 3 or 4 knob configurations.

What Does the Tone Knob do on a Guitar?

However as amps and pedals all have their own controls, quite often with treble controls, then the guitar tone knob is often obsolete. A lot of guitarists rarely use it and just leave it on 10 and then adjust their amp or pedals to shape their tone.

What Does the Volume Knob do on a Guitar?

What Does the Pickup Selector Switch do on a Guitar?

Many electric guitars have more than one pickup. The pickup selector switch is connected to these multiple pickups and allows the player to choose different combinations of pickups and which of them are on. This gives different options for how the guitar sounds and many tone variations.

If you wanted to just have the bridge pickup engaged then you could quickly select this via the selector switch. Alternatively you might want the sound that both the bridge and neck pickup together gives, so you flick the switch to the correct position. It just gives the guitar a lot more variation in the sounds you can get from it.

What do the Controls do on an Electro Acoustic Guitar do?

Electro-acoustic guitars usually have their controls on the side of the body rather than the front. They also tend to be smaller and more like a control panel with sliders or buttons rather than knobs.

The controls depend on the type of acoustic pickup system the guitar has. The most common system works by taking the string vibrations and the sound that is created by them in the body and soundboard of the guitar and converts it into a voltage signal which is sent to the amplifier. 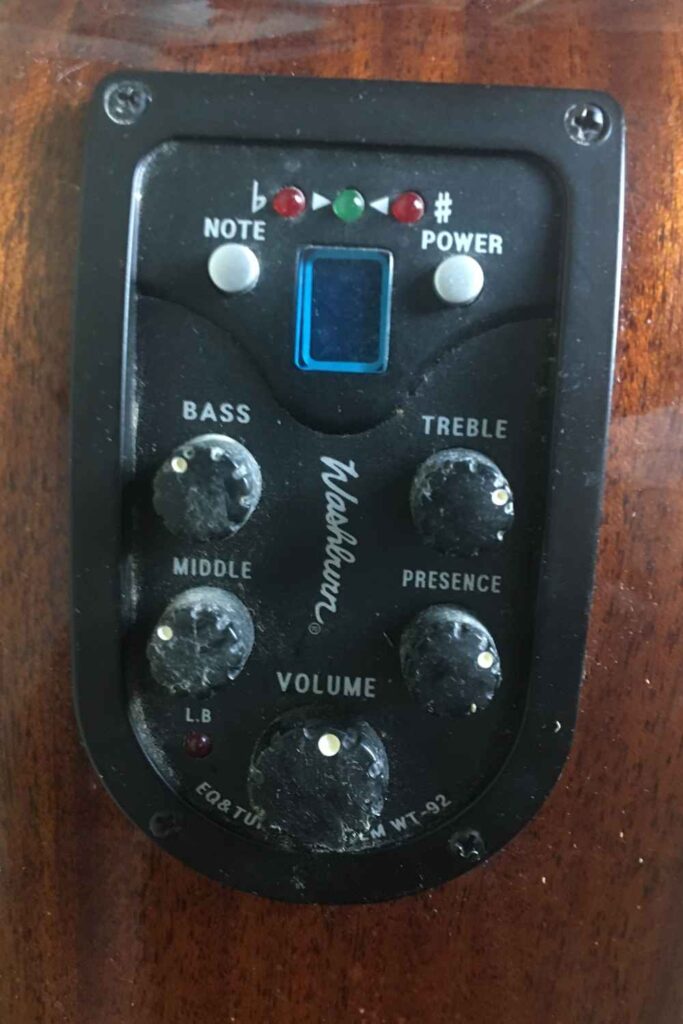 Some of the most common controls on an electro-acoustic guitar are:

Why are the Controls on a Guitar Important

The controls on a guitar are important because they have a big role in shaping how the guitar sounds. Many guitarists have manipulated the tone throughout their most famous songs by using the volume control and switching between pickups.

So depending on what sort of sound you want to achieve the configuration and choice of controls is important. Different wirings of pickups, isolated volume and tone controls, maybe even a kill switch – all will allow you to shape your sound and create interesting dynamics.

What are the Types of Control Configurations

Whilst you could conceivably have any number of controls and switches on a guitar there are a few configurations that are by far and away the most common.

One of the most basic congratulations and popular for that reason, a two knob setup has a simple one a volume knob and one tone job that work on both pickups. It’s very straightforward and if you’re new to the guitar then avoids any confusion over too many knobs.

The most famous guitar to use the two knob configuration is the Telecaster.

You can find guitars with a different three knob configuration – one tone control for all the pickups and then 2 volume knobs that control the neck and bridge pickups respectively.

The four knob configuration is common on Les Paul’s. They offer s lot of flexibility and options as you get 2 tone knobs and 2 volume knobs – one for controlling each pickup. So you can adjust the volume and tone for the neck and bridge pickups independently.

A push-poll setup isn’t strictly a configuration of guitar controls. But it’s not uncommon to find in a fair amount of guitars and is worth understanding.

Push-pull knobs allow the player to pull up the electric guitar knob to select a different setting or push it down to stop it. It’s most often found in relation to coil splitting, whereby you pull one of the volume or tone knobs to split a humbucker pickup into a single coil.

This gives a humbucker equipped guitar the chance to get single coil tones. A Gibson with push-pull coil splitting can mimic a strat, giving it even greater versatility.

The knobs and controls on a guitar may seem confusing at first but they’re actually easy to understand. Once you’ve taken the time to familiarize yourself with what they do and how to use them then they lose that mystery.

You may decide after having read about them here that they’re not that important to you. And that’s fine! Many guitarists never or rarely touch them.

But don’t be afraid to experiment and play around with the controls. You may find that once you’ve got down the basics of how to use them it opens up some interesting possibilities to your playing.