There are many different types of guitars. From electric and acoustic to slide and baritone there is a huge variety.

But what is a resonator guitar? Well it’s a type of acoustic guitar that is constructed to be much louder. In fact you can think of a resonator guitar as being like its own amplifier – it has special cones within the body that amplify the sound created by the strings. It’s significantly louder than an acoustic guitar (it resonates more, hence the name) and has a very distinctive sound. 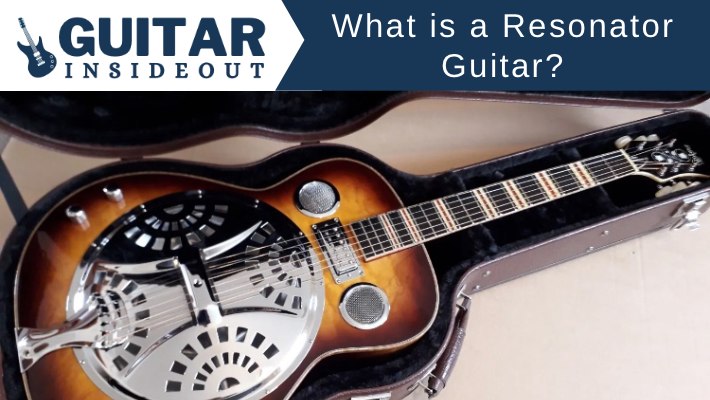 If you’d like to know more about resonator guitars, the different types, what they sound like and more then keep reading.

What is a Resonator Guitar

Instead they have a speaker cone located in the body of the guitar that amplifies the sound. This happens through the bridge of the guitar.

The bridge rests on the speaker cone and as the strings are played they vibrate and the bridge transfers those vibrations to the cone. That cone acts like the speaker in a guitar amp.

This creates a much louder and more distinct tone than a regular acoustic guitar.

Who Invented the Resonator Guitar

The resonator guitar was invented by John Dopyera in the 1920’s. He had a store in Los Angeles where he repaired wooden stringed instruments as well as making his own.

Before electric guitars and amplifiers were invented dance bands and orchestras used acoustic guitars. But they struggled to be heard over the horns, brass and percussion of these big bands and so a solution was sought.

John Dopyera was asked by guitarist George Beauchamp to come up with a solution to this problem, and that solution he came up with was the resonator guitar. It was louder than the standard acoustic guitar and loud enough to be heard over the orchestra.

However as amplification and electric guitars became popular and solved the problem of acoustic guitars being too quiet it made resonators redundant. But they found new popularity amongst blues and bluegrass guitarists as well as being adapted for slide guitar.

What is a Resonator Guitar Made Of?

Resonator guitars are mostly made from wood or metal. Steel, aluminium and brass are the three common metals used and mahogany, maple, rosewood are amongst the woods resonators are made of.

The wooden bodies get the same treatment as normal acoustic guitars with regular lacquer and painting. The metal resonators vary a bit more and you will find them plated, painted with specific designs or just left naked.

How do Resonator Guitars Work

Resonator guitars work by taking the sound caused by vibrating strings and transfer it to the speaker cone located beneath the bridge. The cone is one of the unique features of a resonator guitar and what makes it sound the way it does.

Usually having either 1 or 3 cones, depending on the type of resonator, the cone acts as a speaker and could be compared to the speaker in a guitar amplifier or cabinet. The body of the guitar acts as the cabinet in that it houses the speaker cone.

In comparison to a regular acoustic guitar though the body and material have much less of an impact on the overall sound the guitar makes. The sounding board of a resonator guitar has very little effect on the tone unlike an acoustic guitar.

There are 3 main types of resonator guitars.

Biscuit bridge resonators earned their name due to the look of their bridge – it’s circular and has the look of a biscuit. They have a large, single cone speaker and the smaller, circular bridge means that the transfer of vibrations from strings to the cone happens very quickly and gives them a shorter amount of sustain. Their distinct sound is similar to a banjo and so they became a firm favorite of fingerpickers and blues guitarists.

Tricone resonators have 3 cones, as the name implies. These cones are arranged in a triangular shape and connected to an aluminium T-bar bridge. The 3 cones gives them a huge amount of sustain which has made them very popular with slide players. Due to the complexity of their design and construction Tricone’s tend to be the most expensive of the resonators.

The Spider Bridge resonator takes its name from its bridge which has the appearance of large spider. The legs of the spider bridge spread out and connect with the single cone both at its edge and it’s center. This gives it a similar tone to the Tricone but with a greater mid-range. Spider Bridge resonators are used almost exclusively by slide and bluegrass guitars.

Resonators can come with 2 different types of neck:

A round neck that allows you to fingerpick or strum in the usual way. These necks can also be used to play slide but to raise the action for slide playing puts a lot of pressure on the neck, so isn’t always a good idea. The versatility of round necks make them more appealing to blues players who are more likely to play regular riffs and rhythm as well as slide.

The other type is a square neck which is designed pretty much entirely for slide playing (quite often square neck resonators won’t even have frets). They have stronger necks to withstand the extra pressure and can deal with some fairly extreme tunings.

You can get all 3 of the resonator types mentioned above with both types of neck.

What is a Resonator Guitar Good for?

Resonator guitars are mainly used in blues, country and bluesgrass and can be played as a regular guitar or as a lap steel/slide guitar.

Their distinctive sound and tone are associated with those genres but they are found in other styles of music at times.

Resonators are known for being very ‘twangy’ and quite shrill. You’ll also probably hear them described as ‘nasally’.

That may not sound very appealing but their bright, mid range sound has become synonymous with certain types of music.

Rather than trying to explain the sound it’s probably easier to demonstrate it. The following video gives a good idea of what different resonator guitars sounds like in comparison to an acoustic guitar:

How is the Resonator Guitar Different to the Acoustic Guitar

They also sound quite different. Resonators are shriller and more mid-range focused.

Who Plays a Resonator Guitar?

Resonator guitars have been played by some very famous country, blues and bluegrass guitarists. Here’s just a few:

What is the Difference Between a Dobro and a Resonator Guitar?

The main difference between a resonator vs Dobro is a Dobro is a type of resonator guitar but built slightly differently. A regular resonator cone reflects the sound created off of the back of the guitar whereas a Dobro has the cone facing away from the guitar.

Is a Resonator Guitar Hard to Play?

It depends which type of resonator guitar. A square neck resonator will be much more challenging as you’re playing an instrument that is completely different to a standard guitar.

It will require time to get used to the totally different style and movement necessary to playing slide guitar.

A round neck resonator can be played like a regular guitar and doesn’t have to be played as a slide. They tend to be set up so you can alternate between both. So round necks should be easier to play than square necks and be less of a problem if you’re moving from a standard acoustic or electric guitar to resonator.

Another challenge to playing a resonator guitar is that they usually have a higher action than other guitars. This can be difficult to get used to and painful at first.

Resonators tend to have shorter scale lengths than acoustic guitars. This means the frets are closer together and may be a bit more cramped than you’re used to.

But they aren’t as loud as an amplified guitar. A regular electric guitar through an amplifier will be capable of being far louder than a resonator.

Resonator guitars don’t need special strings but because they are often used for slide guitar and have a higher action they usually require heavier gauge strings.

You can get strings specifically for resonators but regular heavy gauge acoustic strings work just as well.

But the way you are going to tune your resonator will have a significant affect on which strings you should use. The less tension in the tuning then you can get away with a heavier gauge. The greater the tension then that has to be factored in to the strings you choose.

How is a Resonator Guitar Tuned?

It’s tuned the same way you would tune a regular acoustic guitar. The only difference is that many resonators are not tuned ti standard but alternate tunings like open G.

Are There Electric Resonator Guitars?

Yes, you can get modern resonators with a pickup as standard. There are also solid body electric resonators that have magnetic pickups and use amplifiers to create their sound.

You might also see older resonators with pickups that the owners have fitted themselves.

Hopefully you’re now more family with what a resonator guitar is, how they work and what they sound like.

They are a very unique type of guitar and quite specialized in the sound they create and music they are used in. But that makes them interesting and definitely worth checking out.