When reading about the music you play on a guitar you might have come across the term ‘guitar lick’. It’s crops up a lot and you will read and hear other guitarists mentioning ‘licks’ all the time.

But what is a guitar lick? Simply it’s a musical phrase consisting of a few notes that have no specific context or theme. This means that this series of notes, or ‘lick’, can be used again in different songs or musical pieces. You’ll find the same or similar licks appearing in multiple songs and compositions. As a guitarist you learn a variety of licks that can then be altered slightly and used over when playing songs, in solo’s or when improvising. 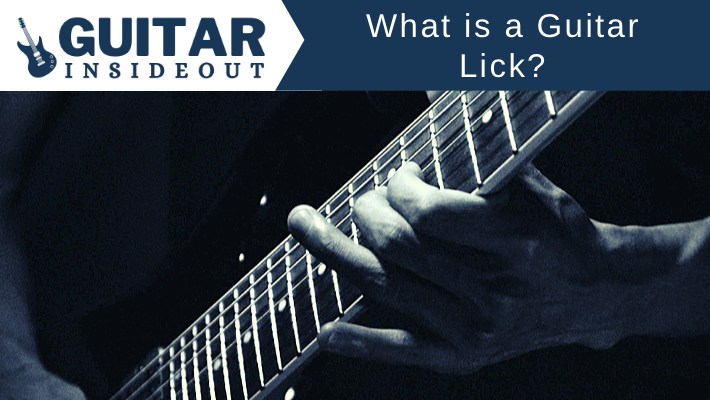 If that’s not completely clear then keep reading as we will look more closely at what are guitar licks, why they’re important, what the difference is to a riff and more.

What is a Guitar Lick?

A guitar lick is a short phrase played over a chord progression. Licks consist of a series of notes that act as embellishments to the song or piece of music being played.

But licks don’t have any real theme. They’re more like an incomplete idea, just a small section or portion of a riff or solo.

And so licks are often used to add interest and spice to a song. That is why they are sometimes called ‘fills’ or ‘runs’.

Guitarists use them to change the mood of a song, add variety, and even to develop new songs.

Why is it Called a Guitar Lick?

There doesn’t seem to be any definitive answer to why they are called licks. It’s origins can be traced back to 1932 in reference to jazz but it’s very likely it was first used in the 1920’s.

The word ‘lick’ can mean “a small amount” so it’s possible it was originally used in terms of the guitar as a small amount of playing or small number of notes.

Whatever the origin is it’s stuck around and become part of the language we use to describe guitar based music and playing the guitar.

With musical terms it’s always easier to understand once you’ve heard it rather than read about it. So let’s look at some example guitar licks.

‘The Lick’ is probably the most famous and most used lick of them all. Take a look at this video to see it in action across a huge variety different instruments and music styles:

As you can see it’s just a short flourish of notes. It’s not necessarily memorable in the way that a riff might be but it acts as a way to make a passage of music more interesting.

Yes, otherwise lots of music would be far more boring! Licks are little flourishes that add to the excitement and interest of a song.

As well as that the type of lick played fits with different styles of music. There are blues licks, rock licks, funk licks etc. that sound right within that genre of music.

And within those styles of music you will find licks coming up again and again played by different guitarists in different songs. That’s the beauty of a lick – it can be used and reused or slightly changed by adding and removing notes.

It’s why when you’re learning to play it’s recommended you learn a few (or more!) licks that you have as a part of your ‘repertoire’. This is so when you’re jamming or improvising you can use those licks you’ve learnt and bust them out when you need them. With time you get more comfortable and can make up your own licks on the fly or change the ones you’ve learnt.

It’s all part of the rich tapestry of music and an important aspect to be familiar with.

What is the Difference Between a Guitar Lick and Guitar Riff

The main difference between a lick and a riff is the part they play within songs. A riff is usually the main idea a song or composition is built around, often repeated throughout it. A riff is essentially the theme for the song and the part most people remember.

Whereas a lick is a small series of notes that are used to enhance and add interest to a song. They’re often used whilst improvising or as small fillers. But a lick on its own tends not to be memorable or important in the way a riff is.

Also lick tends to be a series of single notes whereas a riff can be single notes but chord progressions as well.

Let’s look at some examples to compare and make it easier to see the differences.

One of the most well known guitar riffs and one virtually every beginner learns is ‘Smoke on the Water’ by Deep Purple.

It’s a classic example of a guitar riff. When you hear that riff you only think of the song Smoke on the Water. It’s what defines the song and is completely synonymous with it.

Satisfaction is another legendary riff that the second you hear it you know the song.

Another classic riff and another you tend to learn in the early stages of playing the guitar. It’s repeated consistently throughout the song and accounts for the majority of what makes it memorable.

Now we’ve seen the riffs let’s look at licks and how they’re different.

Below is a great video that shows different types of licks in the style of famous guitarists.

It clearly demonstrates the difference between the riffs we looked at above and how they were the main theme of the song and the little stylistic flourishes that licks are.

You probably wouldn’t remember any of those licks or have them get stuck in your head in the way a riff might. But if you were to play them within a song at an appropriate point they would add to the overall feeling and vibe.

And if you were familiar with a well known guitarists style of playing you could identify a lick as being theirs. Guitarists develop their own sound and the licks they play is a part of that.

What is a Guitar Lick vs Solo?

The difference between a lick and a solo is largely the length. Quite often guitar solo’s are just a combination of licks, and individual licks can be taken from solo’s.

Think of a solo as a combination of licks and melodies whereas a lick is a phrase or embellishment within a song.

What is a Bass Guitar Lick?

A bass lick is just the same as a guitar lick only for the bass guitar. The same principles apply and in the case of the bass guitar a bass lick would be a short phrase of a few bass notes.

So, you should now understand what a guitar riff is, why we use them and how they are different from riffs. Licks are essential to playing the guitar and as you learn more of them you’re musical vocabulary increases.

The only thing left to do is get practicing your licks!