The zero fret is a little bit of an enigma. In some cases reviled and hated, by others adored and considered a technological marvel that makes tuning stability and your tone much better.

But they’re a bit odd. You tend to find them either installed in really cheap and poor guitars or the highest quality, expensive ones.

Which is why I referred to them as an enigma. It’s hard to know what to make of them. 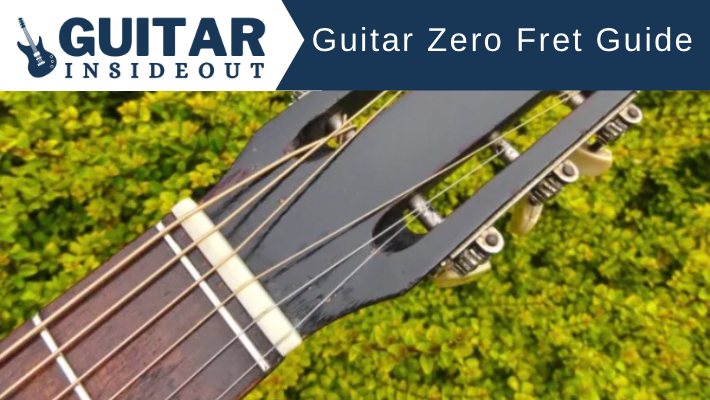 I’ve had a bit of experience with zero frets and if I’m honest I remain unconvinced. I’m not sure they make enough or any real difference to be able to recommend them.

But it’s an interesting topic and worth looking further into. So if you’re not sure what a zero fret is, how they work and what the benefits and drawbacks are then

What is a Zero Fret

A zero fret is essentially a replacement for a regular guitar nut. It goes where the nut usually would, albeit with a smaller nut behind it that acts as a guide for the strings.

The zero fret then sets the action of the guitar – that is the height the strings are from the fretboard – and the other, smaller nut sets the spacing of the strings.

Having a zero fret really just takes the job that a guitar nut does and splits it up. The zero fret takes on the job of keeping the strings at the desired and correct distance from the fretboard while the smaller nut then spaces the strings correctly. 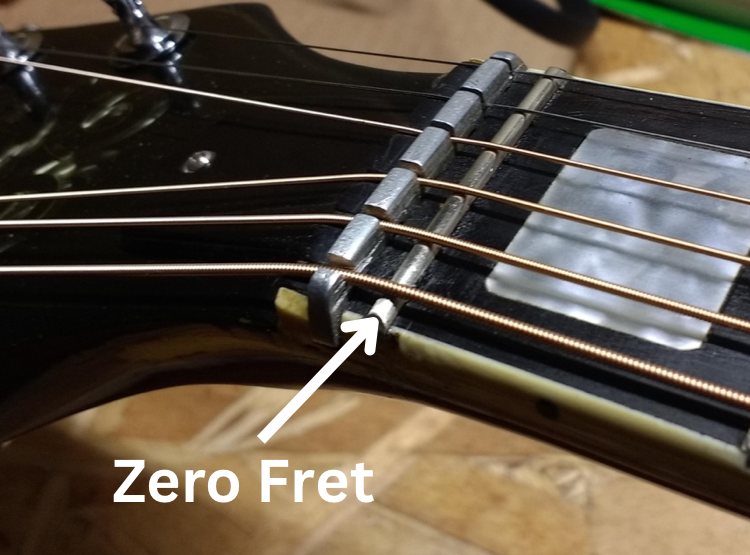 How Does the Zero Fret Work?

A zero fret works by removing the need for a good or very precise nut. With a regular nut and no zero fret the nut has to be cut perfectly otherwise the strings may have issues with tuning stability, buzzing and slipping out of the nut slots.

With a zero fret the nut slot depth becomes irrelevant. As the zero fret provides a consistent metal wire for the strings to pass over it makes the action much more stable and less likely to buzz. 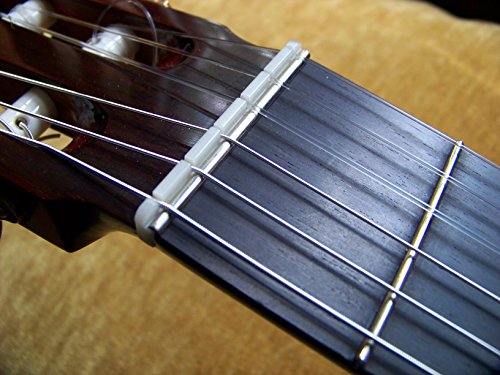 How Does That Affect the Tone?

This is because with a zero fret you’re sort of always playing a fretted note. Instead of having to go over the metal frets and whatever material the nut is made from every string only passes over the metal zero fret.

But there’s even more that makes the zero fret popular. 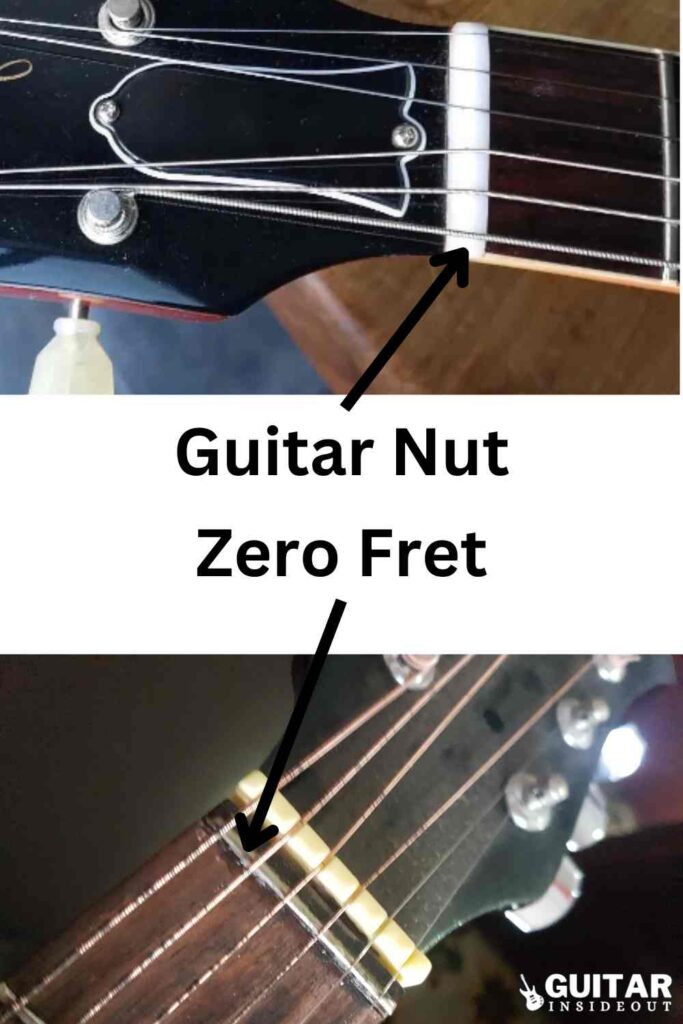 Benefits of a Zero Fret

Zero frets are also beneficial to the manufacturing of guitars as you don’t have to cut each nut for the guitar. You can mass produce nuts all with deep slots because the zero fret takes care of the action and does a more consistent job of it.

This is why they have been much more common in budget/cheaper guitars as it is a way to keep costs down. But as technology has improved cutting nuts accurately has become easier and more affordable which has meant the zero fret is being used even less often.

Negatives of a Zero Fret

It’s hard to say. Tradition is very strong within the guitar world. Many guitarists are set in their ways and react badly to any attempts at modernization or change.

You only have to look at the guitar itself – it’s virtually unchanged from its inception.

Also zero frets might still have a bad reputation from the association they have with poorer quality guitars. It may be unfair but if lots of guitarists only think of them as being used on awful, cheap guitars it’s going to put people off trying them.

Guitars That Do Have Zero Frets

Not many guitars come with a zero fret installed. You mostly have to either install one yourself or get a luthier to do it for you.

Thankfully they’re fairly cheap to buy and can be found everywhere. The ‘Zero Glide’ is probably the most well known.

Zero frets were much more popular in the past. Gretsch, Vox, Hofner and more all produced guitars with zero frets back in the 50’s, 60’s and 70’s.

But there are still guitars that come with zero frets and a few of guitar manufacturers that are known for always using zero frets.

Steinberger headless guitars have a zero fret but don’t use a nut at all. Instead the strings are mounted where the head of the guitar would have been which removes the need for the nut to provide any string guides.

Strandberg is another that only use zero frets. As their website says:

“All .strandberg* instruments come equipped with a zero-fret that substitutes a common nut as the first contact point between the strings and the neck.”

Fylde, a UK handmade guitar manufacturer, also use zero frets on every guitar.

What About Those 2015 Gibson Zero Frets?

Do we really want to get into that? Ok..

Well for those of you who weren’t aware Gibson released a new line of guitars in 2015 for their 100th anniversary. They made some pretty substantial changes, including a self tuning system called the ‘G-Force’, a new logo, an odd hologram thing on the headstock, a wider nut width, very wide neck and a zero fret with brass nut.

This was… controversial! Opinions were divided, although it felt like most came down on the side of hating much of what Gibson had done. The fact they hiked the prices by 20% or 30% at the time definitely didn’t help.

In the years that followed most of those new changes were quietly dropped or reversed. So I think we can safely say they didn’t catch on!

I actually had a 2015 Les Paul Studio with the zero fret and brass adjustable nut. I didn’t encounter any major problems with it but I also didn’t feel any benefits from having it either.

I ended up getting rid of mine but because of the huge neck which my tiny hands couldn’t cope with. Nothing to do with the zero fret. It was a nice guitar though and part of me feels like the Gibson 2015’s are treated a little harshly.

But I can’t defend that neck, it was like a classical guitar! And if Gibson were going to try some new ideas releasing them all at once was naive.

So, Do You Need or Want One?

Well it’s ultimately going to come down to your own personal preference. But as I mentioned earlier – I’m not convinced.

I don’t think a zero fret is really any different to a properly and well cut nut. I couldn’t hear any difference in the tone when using a zero fret guitar and nor did I really appreciate the fact the open strings sounded better.

A well set up guitar will do everything a zero fret can without the need to install anything extra on your guitar. And if they were so revolutionary or that much better than regular nuts it feels like they would have caught on in a bigger way.

If you’re considering a zero fret you might want to look at the different type of nuts and materials they’re made from to see which is better and as possible alternatives:

Guitar Nut Types Explained: What are the Differences