The guitar headstock (or just “head”) is a vital part of the guitar. It’s also one of the most noticeable parts and gives different guitars their own unique character.

Each different type of guitar and brand has an identifiable headstock and decal. And as the headstock houses the machine heads, tuning posts, string trees and more it’s essential to making the guitar work and sound the way it does. 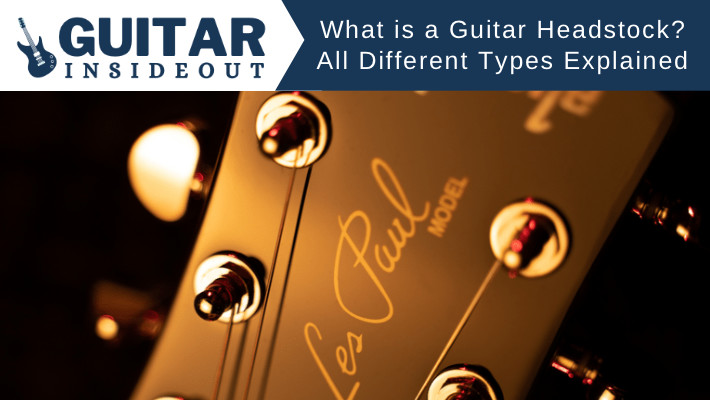 So if you’re interested in knowing more about the guitar head then keep reading. We will look at what a guitar headstock is, what it does, where you can find it, why it’s important and the many different types.

What is a Guitar Headstock

A guitar headstock is the part at the top of the guitar that holds the tuning pegs, keys, posts, and string trees. It holds the strings in place and allows you to tune the guitar by turning the tuning keys to increase or decrease the tension of the strings.

The headstock also features the decal or logo of the guitar manufacturer. Each brand of guitar has a unique decal and headstock shape.

The main reason for the different types of headstock is both aesthetic – they look good – but also to distinguish the individual guitar brands from each other. It’s very easy to see the difference between a Fender headstock and a Gibson headstock, for example, which makes it simple to identify them.

Big guitar brands don’t want you mixing up their guitars! They want to be unique and standout.

What is a Reverse Headstock

They are more common in metal guitars like Jackson’s and Ibanez’s but can be found in most guitar brands.

But for the most part the reason people prefer reverse headstocks is the aesthetic – they’re different, stand out and look cool and interesting.

Where is the Headstock on a Guitar

The headstock can be located at the top of the neck. It’s where the strings begin (or end, depending on your view of the guitar).

Parts of the Guitar Headstock

The headstock houses many of the most important parts of a guitar. The following are most of the parts that make up the headstock: 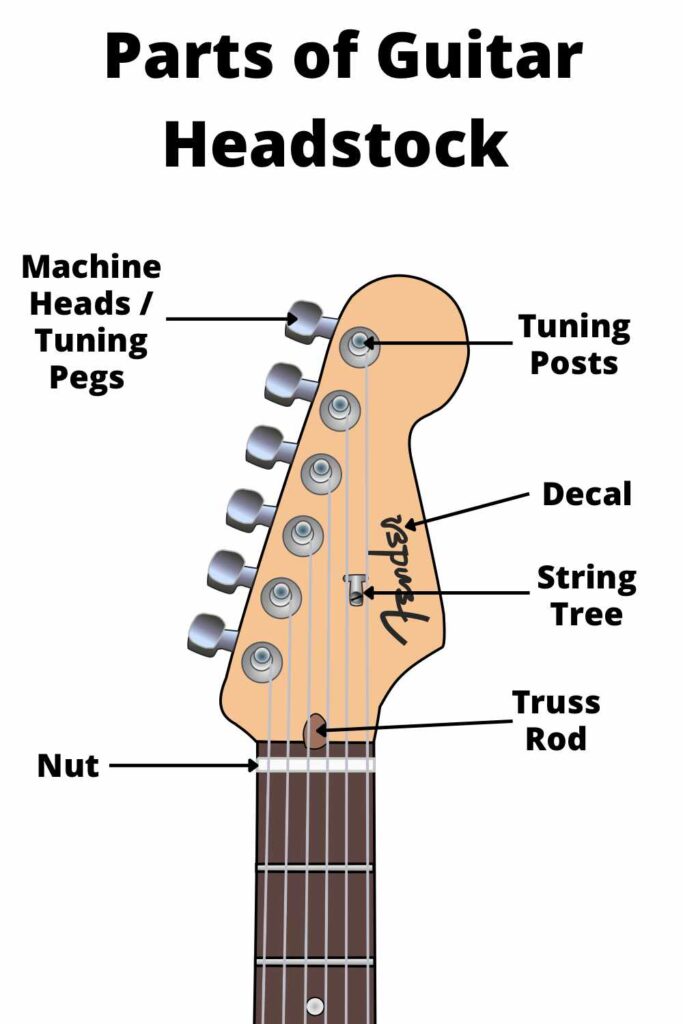 For more information about the guitar anatomy see our guide to the parts of a guitar.

Why is the Headstock Important?

The headstock is important because it holds some of the most vital parts of the guitar. Without the headstock and the parts that it houses a guitar wouldn’t hold its strings in place or with any tension. You wouldn’t be able to tune a guitar without it.

On to of that the tuning stability and sustain of the guitar is directly affected by how good the headstock is. If the headstock is made from a softer material this can make the sustain muddier as it dampens the vibrations of the strings. A stronger, rigid headstock material should give better and longer sustain.

And purely from a visual perspective you would find it harder to distinguish guitars without their individual headstock parts.

What are the Different Types of Headstock?

There are 3 main types of guitar headstock although for the most part you only see 2 of them in electric guitars. These 2 are the flat headstock and angled headstock.

Each guitar brand or manufacturer have their own take on the 2 types of headstock with various shapes and angels. But fundamentally they will be either an angled or flat headstock.

Below we’ll look at what makes each type unique, why they are made the way they are and the advantages and disadvantages of both.

Flat headstock are one of if not the most common types of guitar headstocks. Fender were the first to design a flat head and both the Stratocaster, possibly the most famous guitar, and Telecaster both have a flat headstock.

They are easy to produce and strong, which is what initially made them so popular.

The main advantage of the flat headstock is its strength. Being one piece of wood without any angle to it maintains that strength throughout the entire head. So it’s less likely to break.

It’s also much cheaper to produce a flat headstock. The simplistic design and the fact that it’s made from a single piece of wood mean it’s easy and affordable to build.

Overall it’s one of the most popular types of headstock for a reason: it looks good, is strong and is easy and affordable to produce.

There are some drawbacks though. The major issue is that the shallow angle of the headstock can result in a lack of pressure by the strings at the nut. This can lead to string buzz and strings coming out of the slots of the nut when doing large bends.

There have been methods developed to deal with this issue: string trees placed in the headstock hold the strings down and create a greater angle which in turn leads to extra tension at the nut.

Staggered tuners can also work well and eliminate the need for string trees. With staggered tuners as you move further from the nut the tuning pegs get smaller to create a greater angle. This isn’t always a good idea though and this article on Haze Guitars is an interesting read.

The angled headstock is sometimes known as the “tilted-back” headstock. As the name states, it’s a headstock with an angle.

Easily identifiable as the headstock had a very pronounced angle from the neck. It’s made from a single piece of wood like the flat headstock but requires more work to create as

As they’re more expensive you will mostly see angled heads on the higher end guitars: Gibson’s being the most famous guitars with angled headstocks.

The obvious advantage is the angled headstock creates greater tension at the nut. In contrast to the flat head the angle and the extra tension of the strings on the nut it provides improves tuning stability and makes string slippage less likely. It’s also much more consistent across every string too.

Many guitarists also believe that the angled headstock provides a better tone. You’ll have to try both and make your own mind up about that though!

There are some issues with the angle headstock. It’s a lot weaker and prone to breaking than it’s flat counterpart.

The grain of the wood, which runs along the neck to provide strength, is cut diagonally when producing angled heads. This leaves an area of the headstock that is much weaker and prone to breaking or cracking.

This is demonstrated by the number of Gibson’s that have broken headstocks. The one thing they have in common is the angled headstock and in comparison to Fender’s flat they are much more likely to break.

The other disadvantage is the cost. The angle requires a larger amount of wood to make it which in turn is more expensive, both for materials and labor.

In order to have the best of both worlds – a strong headstock that’s less likely to break but also be angled to keep the higher tension at the nut – a 3rd type of headstock was conceived. The scarf joint.

The scarf joint has the same angle as an angled headstock but is built differently. Instead of one single piece of wood the headstock is made from two pieces.

The headstock piece is cut diagonally and then glued to the neck. The grain of wood is parallel rather than diagonal and so the weakness found in angled headstocks is gone.

You get the advantages of an angled headstocks – the stable tuning and pressure at the nut – without the drawbacks of its weakness and tendency to break.

The only real disadvantage is that it takes more effort and skill to construct. This in turn can make scarf joints more expensive than a flat headstock.

Can you Change the Headstock on a Guitar?

The only way you would be able to change the headstock on a guitar is by either switching the entire neck with a totally different shaped headstock or by sanding and reshaping the current head.

You can’t remove and replace headstocks the way you can with bolt on necks, for example. You can easily buy a new/used Fender neck for a Strat or Tele and replace a broken one. This can’t be done with a headstock.

Why are Guitar Headstocks Different Between Electrical and Acoustic

It’s mainly aesthetic. You can find quite a few acoustic guitars that have almost identical headstocks to electric ones. Gibson’s have many href sticks that are virtually the same in electric and acoustic guitars.

However, electric guitars use metal strings which put a lot more tension and strain on the headstock. This means they need a more rigid and stronger head. The more traditional acoustic and classical guitars headstocks weren’t able to cope which might be one reason why they have different headstocks.

Does a Headstock Have an Effect on the Guitar’s Sustain

The shape of headstock however doesn’t affect the tone at all. Having larger or greater mass of headstock may increase the sustain. But the actual shape should be irrelevant.

The guitar headstock is so important. Whilst it may draw your eye because of the way it looks it plays a huge role in the sound and function of the guitar.

As you have discovered, the headstock houses some major parts of the guitar and has a direct effect on its sound and sustain. Additionally there are 3 different types of headstock and they all have their pro’s and con’s.

So when you’re next looking at a guitar or considering which to buy hopefully you’ll pay a bit more attention to the headstock and remember everything you’ve read here.