It may not seem like that big of a deal but the heel of the guitar is very important. It supports the guitar, strengthens it and also plays a role in the tone.

You may have paid little attention to the heel but it’s not just a random bit of wood. And all guitarists both new and old would do well to be familiar with the parts of the guitar. 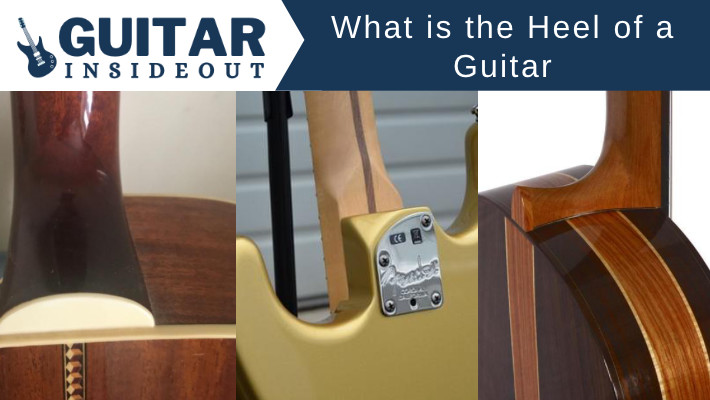 So if you’re interested in learning more about it’s importance then read on. We’re going to take a look at the heel joint of a guitar, what it does, where you find it, why it’s essential and the different types.

What is the Heel on a Guitar?

The heel of a guitar is the join where the body of the guitar and it’s neck meet. It provides support and stability to the guitar as the area where the neck and body join is its weakest spot and prone to breaking.

The heel is usually a piece of wood or a metal plate with bolts that helps secure the two pieces together, depending on the type of guitar. A bolted on neck will use a plate and screws whereas a glued heel will use a block of wood.

Electric guitars can come with either a bolted or glued heel. For example most Fenders have bolted necks whereas Les Paul’s are always glued.

Whilst not common there are some guitars that don’t have a heel. Instead the body and neck are made from one piece of wood. These are called ‘through neck guitars’.

What is a Spanish Heel?

A spanish heel on a guitar is different to regular heels. It is typically found on spanish guitars (hence the name) not electrics or regular acoustics.

It involves a different method of constructing the neck with part of it remaining inside the guitar. The guitar body is built around the neck rather than as 2 separate pieces.

The benefit of a spanish heel is that it is more stable and stronger than regular guitar heels. It also sounds better with a greater resonance.

It is more difficult to build guitars with spanish heels though and this is often reflected in the price. They are usually a lot more expensive.

Where is the Heel on a Guitar?

The heel of the guitar is located on the back of the guitar. It is found where the neck meets the body and is noticeable because it protrudes outward.

For a better idea of where the heel is see the picture below.

Why is the Heel Important?

The heel is so important because it protects the guitar from breaking. The neck join between the neck and body is the most vulnerable part of a guitar.

So having a heel that reinforces and stabilizes that area makes the guitar less likely to break.

The heel also helps with tuning stability. Having a strong heel will make a difference in how well the guitar holds its tuning.

Lastly the heel has a role in how the guitar sounds. It’s widely thought that a glued heel has a richer tone but are more susceptible to breaking in comparison to bolt on necks.

What is the Heel Made from?

The heel is made from wood or metal depending on the type of heel. Glued heels are blocks of wood and bolted heels are metal plates with screws.

A spanish heel is also made from wood albeit constructed differently.

As has been mentioned there are 3 types of guitar heels:

Most guitars will have bolted or glued heels. You can identify which by looking at the heel – if it’s got a metal plate and screws then you know it’s a bolted heel.

A glued heel will be more of a wedge or ridge at the base of the neck.

To identify a spanish heel you look inside the soundhole for a block of wood at the upper end of the body. If that block of wood is a part of the neck as one piece it is a spanish heel. On the outside it will resemble a glued heel but have the look of an archway rather than a ridge.

Can you Replace a Guitar Heel?

It depends on the type of heel. Trying to replace a glued heel is very difficult. But bolted heels mean you can remove a neck and replace it with another one very easily.

Can you Fix a Guitar Heel Crack?

Yes, cracked heels can be fixed. It depends on the severity of the crack but is usually done with glue and clamps to hold the two pieces together.

However, it’s probably not a good idea to try and fix a cracked heel if you’ve never done so before. It can be tricky and you may end up doing more damage and making things worse.

If you have a cracked heel then finding a luthier who is experienced and can fix it for you is probably the best idea.

The spanish heel is considered to be the most stable heel design. As long as the width of the heel falls into the standard range used by most guitars it should be more than stable enough. Having a wider heel is unlikely to provide any extra stability.

The guitar heel is often overlooked but it’s a really key part of the guitar. Without the heel guitars would be far more vulnerable to breaking at the neck join, have poorer tuning stability and sound very different.

Hopefully you’re now more familiar with the heel as a concept and what it does.