You may have seen guitars with a shape cut out of their body. That shape usually looks like a fancy letter “f” and is imaginatively called an “f-hole”.

But what is an f-hole in a guitar? Simply: it’s a shape that is cut out from the body of the guitar (or other instrument) that affects the tone and sound that is produced when it is played. That sound is different to regular guitars that don’t have f-holes and is desirable for specific types and genres of music. 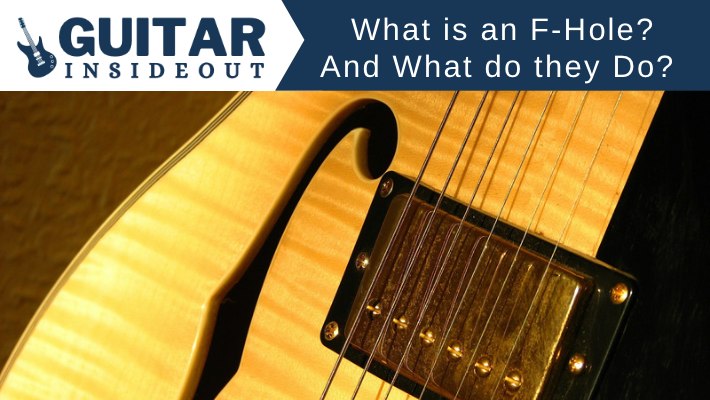 For a more in-depth look at what f-holes do, their history and more then keep reading.

What is an F-Hole?

An f-hole is a hole in the guitar or instrument that is cut out to produce a different sound or tone when played. It can be found in many different instruments and in both acoustic and electric guitars.

It shouldn’t be confused with the “sound hole” that is the round opening behind the strings of the guitar. Both do similar things but produce different tones and voicings of the sound the guitar produces.

What do F-Holes do?

Generally sound holes act to project the sound the guitar makes more effectively. When the guitar is played the sounding board, that is the wooden top of the guitar body, vibrates.

Having a hollow or semi-hollow body acts like a chamber for the sound and allows the sound board to vibrate more. When there is any opening for sound, be that an f-hole or round sound hole, that creates even greater access for the vibrating air within the body of the guitar to travel outside and so the sound becomes even louder and more resonant.

Guitars that only have an f-hole instead of the usual round sound hole have a smaller opening for the air to move through. This often creates a twangy and more mellow tone.

Some players prefer the sound it makes. For instance B.B. King used archtop and then later semi hollow Gibson guitars with an f-hole. But it is quite a different sound and seen more often in specific types of music (jazz, dance bands etc).

Why do Guitars have an F-Hole?

F-holes change and affect the tone of the guitar. Certain types of music require a certain sound. The f-hole is mainly found within semi hollow electric and archtop guitars and was popularized by blues, jazz and big band musicians.

As mentioned above, B.B. King’s original guitar, ‘Lucille’, was a Gibson L-30 archtop with an f-hole. He later became most famous for playing a Gibson ES-335 which is a semi-hollow electric guitar with an f-hole.

So for B.B. King it seemed like he preferred the sound the f-hole produced and chose guitars that utilized them. But for other types of music these guitars and the tones you get from them wouldn’t be a good fit. You don’t see many heavy metal guitarists playing semi hollow electric guitars with f-holes!

Why are they Called F-Holes?

Because they look like the lowercase letter “f”. It’s as simple as that. Take a look at the image below and you should see it. It’s on the body of the guitar and is a bit fancy and has a flourish to it, almost like calligraphy, but at it’s heart it’s the shape of an f.

Cut-outs from guitars and other instruments come in different shapes and sizes. There are S-holes, C-holes, D-holes etc.

The f-hole originated in violins from the 16th century and mainly through luck. It seemed violin makers stumbled across the f-hole through craftsmanship error but stuck with it when they found it to be the best design.

Guitar makers like Gibson no doubt followed the lead of other stringed instruments and copied the f-hole, with its origins being in archtop acoustics.

As time went by and electric guitars arrived the f-hole became less necessary, although can still be found amongst semi-hollow electrics.

Where is the F-Hole on a Guitar?

See the comparisons below for a clearer example:

What is the Difference between an F-Hole and a Round Sound Hole?

The difference, apart for the look of the guitar, is in the sound and tone. A rounded sound hole will create a deeper, louder and more resonant sound with greater bass.

If you need to project your sound further and sound louder then a round opening is preferable. It’s the most commonly used type of guitar and found across all the most popular forms of western music.

The f-hole creates a much more mellow, softer and twangy sound. It’s not heard very often in pop or rock music and tends to be used in blues, jazz or dance bands.

Which Guitars have F-Holes

They’re found in archtop, electric and occasionally acoustic guitars. Originally they were a crucial part and sound of archtop guitars in the early 1900’s that Gibson popularized.

Guitars have evolved since then and for a while jazz, blues and country guitarists moved to solid body guitars that didn’t have or need f-holes. However, archtop guitars have had somewhat of a renaissance and Ibanez’s Artcore range is very popular, as is the Gibson Epiphone Dot.

In the more common rock and pop world you can find the range of Fender Thinline Telecasters, the Gibson ES range and Gretsch guitars, amongst others, all played by prominent guitarists and feature f-holes.

Whilst not particularly common, the f-hole certainly has its place in the history of the guitar. It was a key feature of the archtop guitars that were where the first electric guitars evolved from.

The f-hole is still found in popular guitars today and used by famous guitarists. Whether it be just the image and feel it conveys or the signature sound f-hole guitars are here to stay and will be around for a while yet.

1 thought on “What is an F-Hole in Guitars and What do they do?”