Guitar body’s come in lots of different shapes, sizes and configurations. Different woods are used and the way they’re constructed varies depending on the company and type of guitar.

So it’s not surprising that the internal construction of the guitar body is also different. That’s where the term “chambered body” comes in.

If you’re not sure of the difference between a chambered and a solid body guitar, or just unfamiliar with the term full stop and want to know more then keep reading. We will take a look at what they are, the differences, why you would want one, how to tell them apart and more.

So let’s get going! 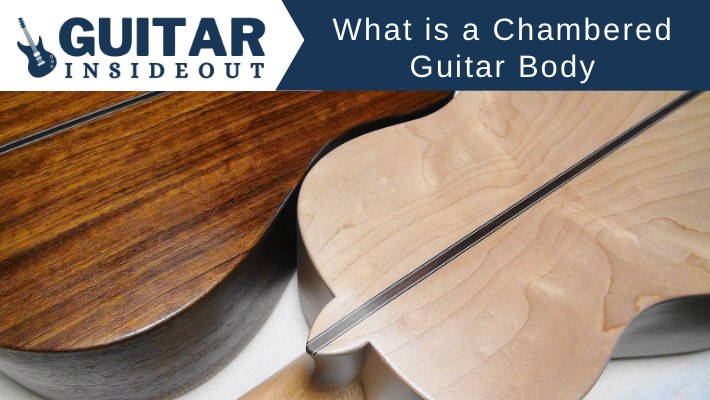 What is a Chambered Guitar Body

When a guitar body is being constructed it starts out as a solid block of wood. But for various different reasons in some guitars the manufacturers will ‘route’ the body or create gaps and chambers within the wood. These chambers are like air pockets running through the body.

Many guitars have chambered bodies but you wouldn’t be able to tell just by looking at them. The more recent Gibson models, for example, are chambered but look identical to a solid body guitar.

Other guitars make it clear they have been chambered by the inclusion of an f-hole. This shows the area that is routed and you will often be able to ‘see through’ and into the body where the wood has been removed.

How to Tell if a Guitar is Chambered

Unless it has a very obvious sign – like an f-hole – then it can be hard to tell if a guitar is chambered. On the face of it a solid body and chambered guitar look identical.

However, one area you will notice a difference and one of the best ways to judge is the weight. If you pick up a chambered and pick up a solid body you will feel the big weight difference. The solid will be much heavier.

The other way to find out if a guitar has a chambered body is by researching it. Try finding out the model and year it was made and then look up the specifications of that particular guitar. Not sure how – try the Guitar Dater Project or the Guitar Insite.

You can even email the likes of Fender with a serial number and they’ll provide you all the details of your guitar. A little bit of searching online and you can find the specs for that model and whether it was chambered or not.

What are the Reasons for a Chambered Guitar Body

The main two reasons for chambering a guitar are to reduce the weight and to give a certain sound or tone.

Wood can be extremely heavy. Especially large blocks of it. So when a guitar body is made from a solid block of wood it inevitably is very weighty.

When playing guitar, especially live, it can be uncomfortable and painful to stand with a heavy slab of wood hanging from your neck and shoulders for a hour or two every night.

So it made sense to chamber the body of some guitars and give guitarists the option to have a lighter, chambered body to make playing live more bearable.

Often if guitarists prefer the tone of a solid body (so not chambered) guitar they will record or practice with that guitar where they can either playing sitting or take breaks. Then when out on tour they will play live with the more comfortable chambered guitar to save themselves neck, shoulder or back problems.

Chambering the body of a guitar affects the tone and sound it produces. You get a different sound to a solid body that some prefer and specifically look for.

The sort of sound it produces is debated but it seems to be very subtle so unless you’re a real aficionado it probably won’t matter.

Yes, as mentioned above there is a difference. It isn’t very noticeable and usually only picked up by people with very well trained ears, but it’s there.

The overwhelming verdict is that chambered bodies tend to result in a less sharp tone and are more “airy”. Lighter in sound and the notes are held for longer than a solid body.

But with a solid body the sound and sustain is projected better, they have more attack and punch to them.

It all comes down to preference though. Neither is right or wrong.

Benefits of a Chambered Guitar Body

The main benefit is the weight relief. Guitars can become very heavy and so having a lighter alternative with very little difference in sound is preferable to many.

Other than there are those who find the sound of chambered guitars to be better than solid bodies. This is entirely subjective though and comes down to each individuals preference.

Generally, no. Most Fender Telecasters are solid body and not chambered. There are a few however that have been produced but they aren’t common and if you get a regular standard or Squier telecaster then it won’t be chambered.

Some Les Paul’s are chambered, some aren’t. Originally the Gibson Les Paul Standard was solely a solid body guitar. But Gibson decided to try and make them lighter. 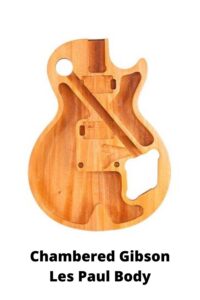 In 1983 they began weight relief of their Les Pauls and that became chambering from 2008 – 2012. After 2012 they moved back to just weight relief as opposed to fully chambered and since 2019 they’ve reverted to solid body again.

So if you buy a new Les Paul Standard today it won’t be chambered, but if you were to buy one made between 2008 and 2012 it would be.

You should now be confident with what a chambered guitar body is, how to recognize one and what the benefits of them are. As a very common type of guitar body it’s important to understand what these terms mean, especially when deciding on which guitar is right for you.

So remember: a chambered body has air pockets (chambers) routed throughout it in order to make it lighter. It affects tone somewhat, but is mainly done for its weight relief.