One of the most frustrating parts of learning the guitar is the amount of new language and terms you have to pick up. ‘Scooping the mids’ is one you may have come across and be confused by.

And I can understand why. It sounds like something from a cookbook! “Take one scoop of mids, add to the bowl…” 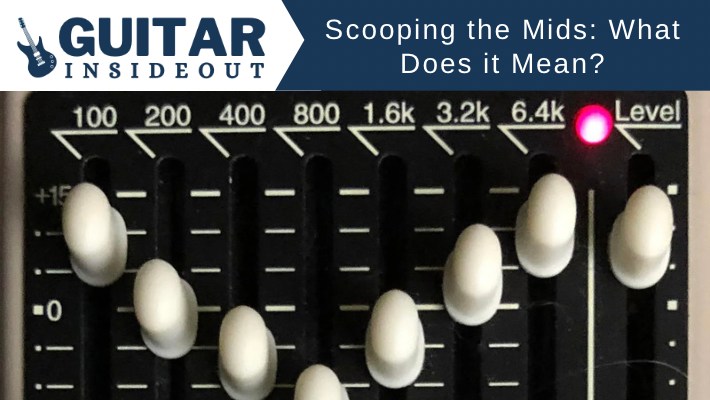 Ok, I’m being a bit silly but the terminology can be difficult to get to grips with. Thankfully ‘scooped mids’ is easy enough to understand and is worth knowing about as it crops up in a lot of certain styles of music.

So let’s take a look at what both ‘scooped’ and ‘mids’ mean, how you get a scooped tone and why you would want to along with some examples.

The mids refers to the midrange frequencies of sound, or in this case the tone from your guitar and amp. There are high frequencies, commonly known as treble, and low frequencies, which is the bass.

The midrange is what makes up a lot of the guitar sound. So when you reduce those midrange frequencies the sound becomes less present.

What Does ‘Scooping the Mids’ Mean?

Scooping the mids just means that you turn down the midrange frequencies on your amp. Most amps have a ‘mids’ knob as part of the EQ. So scooping the mids would be turning that knob down to zero or close to it.

The tone from your amp would have plenty of treble and bass (high and low end) but very little midrange. This leads to your sound sort of fading into the background. It loses any real punch.

But it is a specific tone that has its appeal and works in some genres of music.

If you’re using a graphic EQ then you might notice the scooped mids take on a “V” shape, or some people think it looks like a smiley face.

How Do You ‘Scoop the Mids’ of your Amp?

Simply turn the ‘mid’ knob all the way down and turn the bass and treble up a bit, usually above noon. That’s it. You now have scooped mids!

If your amp doesn’t have a mid knob then the only other way to get a scooped tone would be with an EQ pedal. Put that in front of your amp and do the same – turn down the mid and turn up the bass and treble – and you will get a scooped sound.

Whether you like that tone is a whole different matter. But you can try it out and see how it sounds.

Why is it Called ‘Scooping’ the Mids?

It’s called ‘scooping’ because you are scooping all the mids out of the sound. Also on an EQ when the mids are turned down and the bass and treble stay high it looks like a scoop has been taken out of it.

Think of it like when you have Neapolitan ice cream and you take a big scoop of chocolate but leave the vanilla and strawberry. (Yes, that’s a terrible analogy, I know!)

Why Would You Want to ‘Scoop the Mids’?

Some people just like the sound. If you’re playing metal then scooped mids gives you a very crunchy tone that works well for the rhythm guitar. It gives more room for the lead guitar to cut through, which is important for some sorts of extreme metal.

Also when playing alone or in your bedroom scooping the mids can make your tone sound amazing. Albeit in isolation. The problem is when you come to play live and with other people a scooped tone gets completely lost in the mix.

Now that might be what you want. Some music works better with the guitar very much in the background and not front and center.

But it is quite a divisive tone with some guitarists swearing by it and others really hating it.

The other reason for scooped mids is that different amps have different midranges. We know amps are voiced differently and sound different from each other. Well some are just naturally very midrange heavy (some of the Mesa Boogie Mark Series are good examples of this).

So you might need to scoop the mids on a certain amp to get it to sound good in a way that you wouldn’t on another. Problems arise when you then apply that need for scooped mids across the board.

You need to judge each amp on its own rather than thinking because a certain amp you played needed low mids then every amp will. 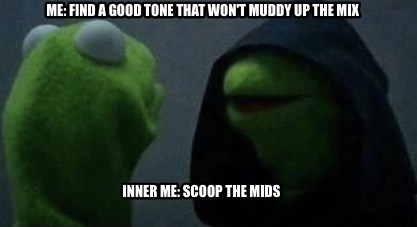 Why Do Scooped Mids Have a Bad Reputation?

It’s a sound often associated with younger and new guitarists wanting to get a metal tone and just turning their mids all the way down. It’s similar to the way the BOSS Metal Zone pedal got a terrible reputation by being used by beginners looking for a high gain sound.

Basically it ends up sounding good to them in a very isolated setting but awful in any other context. It doesn’t translate to playing with other people, and if you get a guitarists who is excessively scooping the mids it can be frustrating trying to play together.

The guitar is lacking in the way of treble and bass, and is very much a mid range instrument. So when you play in a band, even when you turn your bass and treble up, you get lost amongst the other instruments.

The bass guitar and kick drum overwhelm your bass and the cymbals drown out your high end. The space the guitar you should be filling is the midrange, but if you’ve scooped them then that leaves you completely lost.

In this situation guitarists compensate by turning the volume up to try and get heard. You end up with a very loud and yet still unclear sound that no one enjoys.

On top of that there are a lot of people who just don’t like the way it sounds full stop. In certain situations mentioned earlier (metal) scooped mids can face a place. But it can still be quite shrill, fizzy and harsh. If you’re into metal you’ll probably like that sound but many guitarists find it off putting.

As with everything though it has its place and if done right it can sound good.

It’s all well and good reading about scooped mids as a concept but hearing it will help you understand it better. 80’s and 90’s metal and hard rock is what it’s mostly associated with, and old school Metallica is a classic of that time and sound.

The …And Justice for All album is a great example of scooped mids:

And pretty much everything Pantera did was scooped:

So there we go! It didn’t hurt Metallica so scooping the mids can’t be all that bad. You can try it yourself though and decide if you like it. But be warned, you might make yourself pretty unpopular with other guitarists.