A guitar amplifier turning on but with no sound is a common problem. If you’ve been playing guitar for any length of time there’s a good chance you’ll have encountered this at some point.

Unfortunately the reason for why an amp has stopped working can be varied. Quite often it’s something obvious and that’s easily fixed. Other times it’s a bit more serious and may need a professional looking at it.

But in order to get to that point there are some simple things you can try and rule out first. And hopefully they will save you the hassle and expenses of taking your amp in to be looked over when it may not have needed it.

Warning: if you don’t know what you’re doing don’t open up and try to fix your amplifier yourself. There is a real chance of electrocuting or causing yourself harm. Take it to someone who repairs electronics for a living.

Is your Guitar Plugged in

We’re going to have to start with the silly and embarrassing reasons first because it’s important to get them out the way. You wouldn’t believe how many people find that their amp or guitar isn’t working not because of any major fault but… it’s not plugged in.

You feel like a fool and I’ve done it myself, but hey, at least nothing is broken!

So first check to make sure your guitar is plugged in. Both ends! Is there a cable going from the guitar into the amp?

It probably isn’t that but it happens far more frequently than you’d think and checking now might save your hours of frustration. 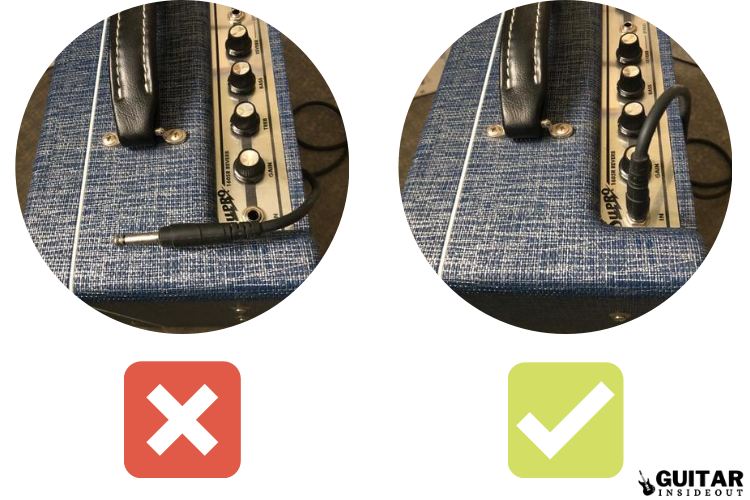 Is the Amp Plugged in

Again, it’s an easy mistake to make but check to make sure the amp is actually plugged in at the wall. There’s nothing worse than going through every other possibility to find you just hadn’t plugged it in!

Also if it’s a head and cabinet then make sure the cabinet is actually plugged in to the head! People unplug them and then forget.

Is the Amp on Standby

Another embarrassing gaffe but again very common. You think you’ve turned your amp on and can’t understand why it isn’t working.

You’re scratching your head, it doesn’t make sense, the amp was working fine before, the power is on and.. oh, it’s still on standby.

The good news is you probably won’t make the same mistake twice! 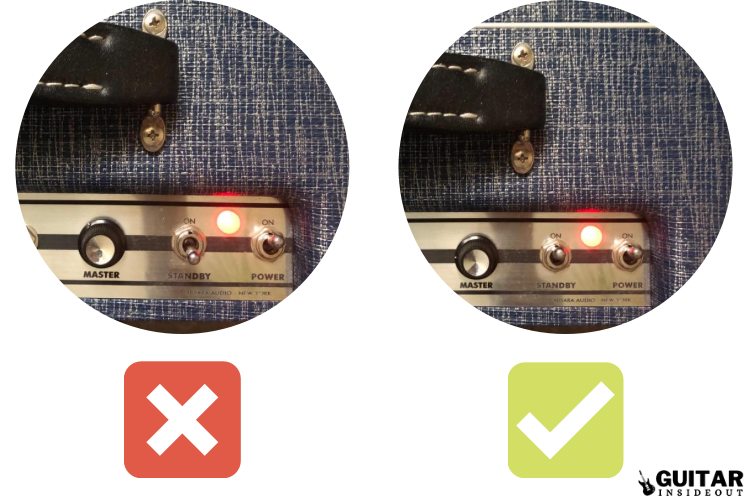 Is the Guitar Plugged in to the Correct Jack

This is another mistake that can happen very easily. You might have been in a rush or distracted and you’ve plugged your cable into the the headphone or footswitch jack rather than the input jack.

This is something to check regardless but it’s especially important if you have a new amp. It’s easy to get used to the amp you’ve had for a long time. Then when a new one arrives with a different layout of jacks you make the error when plugging your guitar in. 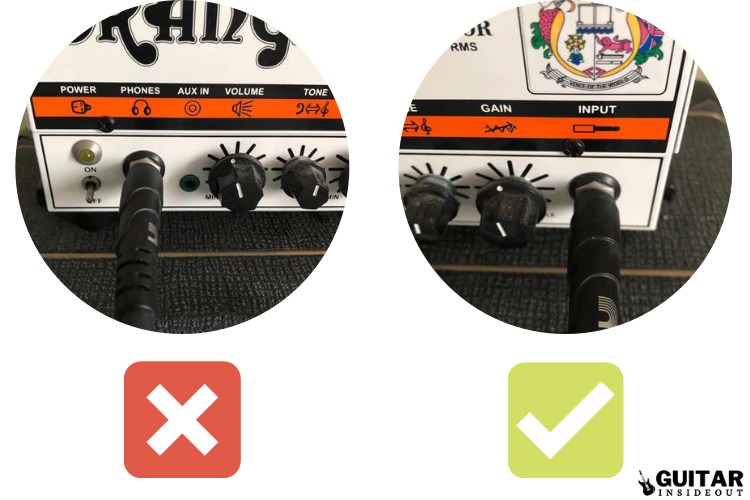 You may not have intentionally turned the volume down since you last used your amp but something else might have.

It doesn’t take a lot to move the knobs on amplifiers. You could have brushed or accidentally knocked the volume control with something without realising.

Whatever the reason the volume knob being at zero can definitely make you think your amps not producing any sound when in reality there’s nothing wrong. 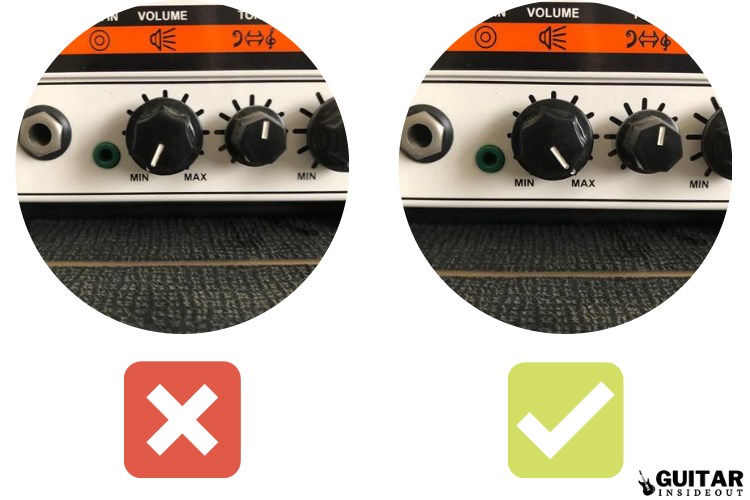 The guitar volume knob can also be a big culprit for an amp looking like it’s broken. Again, maybe you accidentally knocked the volume knob and it got turned down.

Or the last time you played you had turned it down for some reason, doing volume swells or something. Even if you’re confident you didn’t it’s worth checking just in case.

Are the Speakers Connected

Check and see if that has come unplugged or loose.

Is a Pedal Disconnected

If you’re running any pedals in front of your amp then one disconnected cable and everything will stop working. It’s so easy to miss as well.

So either check all your pedals and make sure there’s no problems with them. Or to be completely sure bypass them entirely and just plug your guitar straight into your amp.

That will instantly rule out the pedals as being a cause for the lack of sound coming from the amplifier. 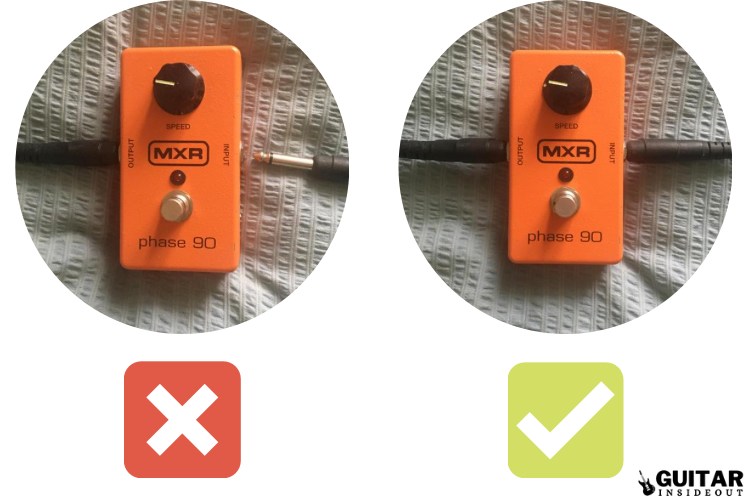 A notorious reason for amps not working is a faulty cable. It’s probably the most common cause when you take out the silly reasons like not having plugged it in.

Cables are prone to breaking, especially if they are old. They go through a lot of stress over time and get broken or worn.

So try a different cable, preferably one you know is working. There’s a slim chance that the 2nd cable you try is broken too so aim to use one that you know has been working recently.

It’s always a good idea to keep some spares or backup cables for this precise reason.

Sometimes there’s nothing wrong with the amp or cable. It’s the guitar that’s got a fault.

If you have a 2nd (or 3rd, or 4th…) then try a different guitar with your amp. If you don’t have any other guitars maybe try borrowing one from a friend.

Alternatively, if you have access to one, try the same guitar on another amp. If that one doesn’t work either then it’s very likely to be the guitar, and if it does you know it’s the amp.

Sometimes the power outlet can go wrong. You may be plugging your amplifier into a power source that isn’t working.

Try another wall socket somewhere else in your house, rehearsal space or wherever your amp is located. Anywhere it’s a different circuit so you’re checking to make sure it isn’t the source of power that is the issue rather than the amp itself.

If your amp has a headphone jack then grab a pair and try them with it. Getting sound through the headphones but not though the amp/speakers? That could be a wire has come loose to the speakers.

Alternatively it could be that headphone jack is broken. Basically the amp believes there is always headphones plugged in which is why it’s cutting off the signal to the speakers.

If it’s either of those then they are simple fixes but still probably something a professional should do.

Head and speaker cabinets work better if they have the correct and matching impedance (ohms), especially if it’s a tube amp. Make sure your amp and speakers are either matching or the amp has a lower ohms that the speaker: 8-ohm speaker and 4-ohm amp, for example.

If it were the other way round you might have damaged your speaker by sending it a signal it couldn’t handle.

If you’re using a tube amp then one of the main reasons they stop working is a broken or bad tube. It comes with the territory and happens all the time.

Diagnosing it yourself can be tricky if you don’t know what you’re doing or looking for. A quick few things you can check in daily are:

You will need to replace any bad tubes to fix the sound issues you’re getting.

Unfortunately by this point you’ve exhausted most of the basic things you can do. I wouldn’t recommend trying to open it up or fiddle with the components inside.

Not least because it might not be safe if you don’t know what you’re doing – electronics aren’t things to be messed about with if you’re an amateur. But also you could do some serious damage to your amp that costs you more in the long run.

The best choice would be to take it to a professional who can properly diagnose and fix the problem.