When you’re new to the guitar your hand and finger size/length is a real concern. As someone with very small hands and short fingers I was convinced it would mean I could never play well.

So, do you need long fingers to play guitar? No, absolutely not. There are thousands of great guitarists with normal or short fingers. Whilst having smaller hands and fingers may make some big stretches and certain chords a bit harder you can still play virtually everything without any issues whatsoever. Your finger length doesn’t really come into it. 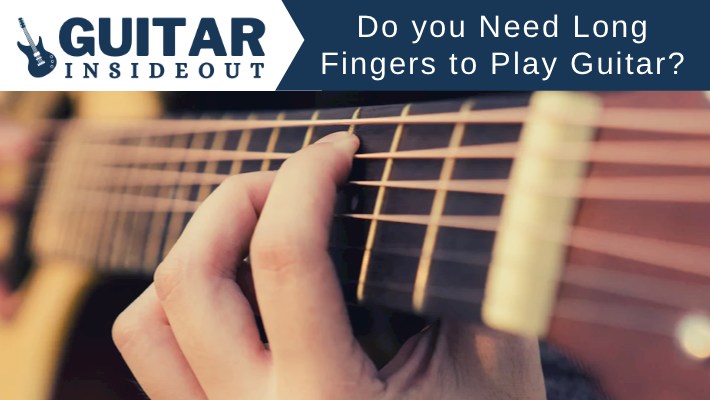 But if you need more convincing then keep reading. We’ll take a closer look at how finger size affects plying the guitar, tips to laying with shorter fingers and some examples of guitarists with short fingers.

Do You Need Long Fingers to Play Guitar?

No, the length of your fingers is largely irrelevant. What matters is having the right technique, getting your hands and fingers used to playing the guitar (if you’re new to it then they won’t be) and putting in the hours of practice.

There’s no special trick you can do to make it easier. It just requires time and using your fingers in the correct way. Eventually you build the necessary strength and dexterity.

I’ve been playing the guitar for well over 10 years and have ridiculous short fingers and tiny hands (no jokes please!). My hands are so small I’m self conscious of shaking hands with most people as they’re so puny and child-like they get eaten up by everyone else’s meaty grasp.

And when I first started playing I was sure my hands would make it impossible. But here I am all these years later. I may not be the next Hendrix but I can still play half decently.

Just to put that into context here’s a picture of my hand and fingers with measurements: 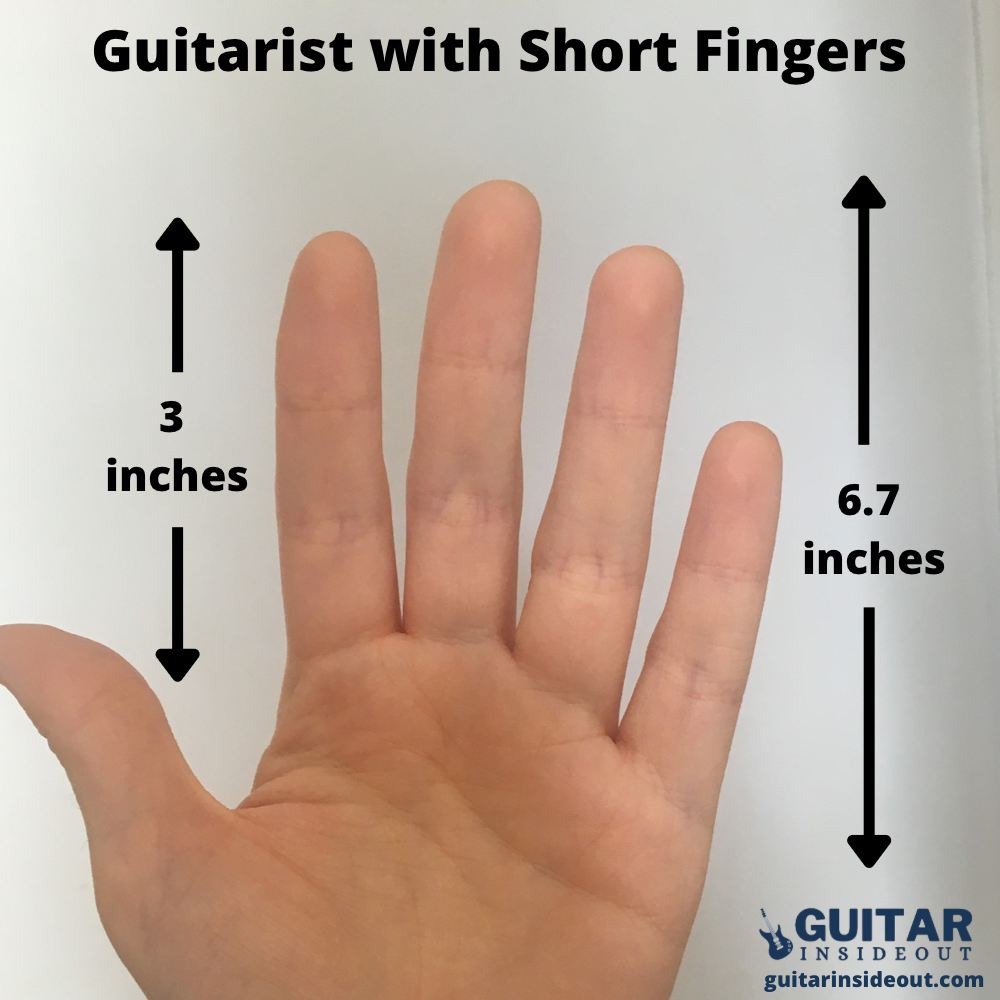 The average male hand size is 7.6 inches when measured from the crease of the palm to the top of the longest finger. My hand is only 6.7 inches long, considerably shorter than the average male.

The average male middle finger is 3.7 inches, whereas mine is only 3 inches. So again considerably less.

The average female hand size is 6.8 inches so I’m actually slightly shorter than most women as well!

And there are lots of children and women/girls with smaller fingers and hands than me. And they can still shred just fine. So if you think you need long fingers to play the guitar you’re 100% wrong.

No, the length of your fingers doesn’t really matter. what’s far more important is technique.

Make sure that you’re wrist and arm are in the correct position. Ensure your thumb is placed behind the neck in line with your index finger. Don’t play with a death grip or thumb over the top of the neck.

Getting all of the fretting hand techniques right will go a long way to helping any problems you face with shorter fingers.

Also when you’re starting out your fingers and hand aren’t used to what you’re asking them to do. It takes time to train the muscles and tendons in the hand so they’re flexible enough to make those stretches.

Sadly it just takes time and practice. It’s not what anyone wants to hear but there’s no secret answer.

You just have to knuckle down and accept it’s going to be frustrating. With time you find your small fingers become less of a problem. You’ll be making stretches you didn’t think you’d ever be able to and aren’t accidentally muting other strings.

If you’re still worried about being limited by short fingers then take a look at Django Reinhardt. He’s widely considered one of the greatest guitarists of all time and only had 2 fingers on his fretting hand! Check him out:

And if you still don’t believe me take a look at these children playing:

It’s a bit creepy but look – they have tiny hands. If you’re reading this then I’m guessing your hands are bigger than theirs. So there’s no excuses!

Is there an ideal hand size to play guitar?

No, there is no ideal hand size for playing the guitar. There have been and are amazing guitarists with huge hands through to tiny hands. Prince and Angus Young were both very small with small hands and they’re 2 of the greatest of all time.

Tips for Playing with Short Fingers

We have established that you can play the guitar with short fingers but that doesn’t mean they won’t cause any issues at all. I have very small hands and can’t play the low E string with my thumb over the top like lots of famous guitarists do.

It’s annoying but doesn’t stop me from playing anything. I just have to play barre chords the regular way and occasionally adapt other bits.

There are things you can do to reduce any issues that might arise from smaller fingers or hands though:

What if your Fingers Won’t Stretch

Then you need to practice more! Honestly that’s the answer most of the time. That or you need to work on your technique.

Almost everyone struggled when they started out. Holding down the strings is hard, getting chords to ring clearly, not muting strings with your hands or fingers etc. all of it is tricky and takes time to master.

It’s the same for stretches and finger dexterity. You just have to keep going. If you’re really struggling then getting in-person lessons might help. Having someone to look at and identify any areas that are holding you back can be invaluable, especially when you’re self taught.

But This Song is Impossible to Play

There may occasionally be a song or part of a song that it doesn’t matter how much you practice you just can’t stretch to. A good example of this is ‘Every Breath You Take’ by The Police.

It’s a great song with an iconic riff. But that riff requires an A barre chord shape with a nasty 5 fret stretch involving your little finger. Lots of people struggle with it regardless of hand or finger size.

But in most cases with difficult stretches or awkward fingerings there are little tricks or alternative ways to play them. Justin from JustinGuitar explains how he was able to play ‘Every Breath You Take’ after struggling with it originally in this video:

So if you find a song you’re really having issues with then search around for an alternative voicing, different positions for notes or way to play it.

The main take away from this is that you shouldn’t let short fingers stop you from playing the guitar. Yes, it may make certain songs or chords more difficult but there are enough examples to show that it doesn’t really make much difference at all.

Practice, persistence and correct technique are what’s really needed. If you spend enough time playing then I can guarantee you it will come eventually and you’ll look back a year or so from now and wonder why you were worried about your short fingers.