Sustain is something a lot of guitarists love and want. In fact they want as much of it as they can get! But how do you get that sustain? With a guitar sustainer, obviously!

Yes, there are systems you can get to give you unlimited sustain. You may have seen some of your favorite guitarists and their guitars equipped with them. 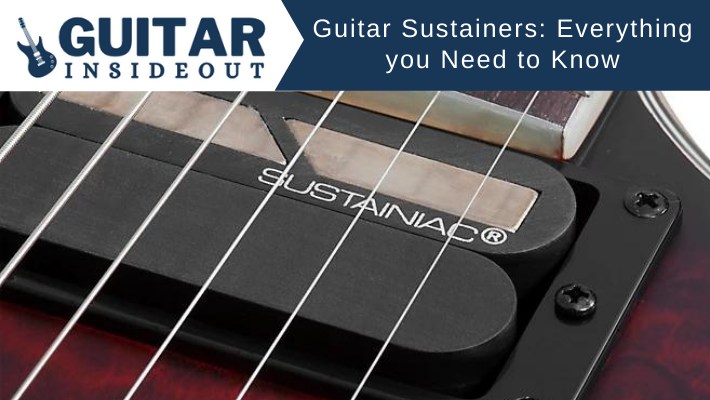 But they aren’t all that common, and most people know very little about them.

So if you’re not familiar with guitar sustainers, what they are and how they work then let’s get into it.

What is a Guitar Sustainer

There are other types of sustainers too – ones that can be attached to the headstock, for example, but the most popular way is through the pickup system.

One of most famous ways to generate sustain for the guitar is with a device called an EBow. The EBow acts like the bow you would use on other stringed instruments, like a violin, and allows you to create infinite sustain. It works by making the strings vibrate without having to constantly hit or pluck them.

The EBow has been used by many different artists over the years, and does create an infinite sustain. But as time has gone on more up-to-date technology has bettered it.

Sustainer pickups have overshadowed the EBow as arguably the best types of sustainers. The benefit of these is that you have your hand free to use the pick and play single notes, chords etc. Whereas the EBow is limited to one string at a time, not making it very practical (although it does have its use for specific contexts)

The only downside to sustainer pickups is they can be awkward to install. There are alternatives that can be attached to the headstock but they are often large and cumbersome. Thankfully some guitars come with sustainer pickups already installed so you can avoid having to try and install one yourself.

More recently TC Electronic have released the AEON, intended to produce infinite sustain. It’s similar to the EBow and definitely more affordable. It makes for a good and fairly cheap entry into trying out sustainers.

How Does a Guitar Sustainer Pickup Work?

There are two types of sustainer pickups: electromagnetic and electroacoustic.

The electromagnetic sustainer pickups work by creating a magnetic field using the battery within the pickup. This magnetic field then matches the frequency or vibration when a note is played and keeps the string vibrating constantly. Your pickup then takes that continuous signal and sends it to your amp.

Electroacoustic sustainers work virtually the same as electromagnetic ones except they use a floor pedal as a controller. For some this is worth not having to install an awkward pickup and electronics in their guitar. But for others a heavy item attached to their headstock and floor controller is too much of a sacrifice.

Which Artists Use Guitar Sustainers?

Sustainers are often associated with metal and prog players but they’ve been used by a wide variety of guitarists.

Here’s just a few famous guitarists who have rocked a sustainer at some point:

Do Guitars Come with Built in Sustainers?

Yes, you can buy guitars that have sustainer pickups or systems already installed. This saves time, money and the hassle of having to buy a separate sustainer and install it.

However, there aren’t that many guitars with sustainers built in. Few people require or want a sustainer and it’s still fairly niche, which means the big guitar brands like Fender and Gibson don’t really offer them.

Fender have recently released the EOB Stratocaster (Ed O’Brien of Radiohead’s signature), which comes with a built in Fernandes sustainer.

Fernandes and Sustainiac are the two most popular and widely used sustain systems (if we exclude the EBow). They are similar to one another but with enough differences to make it worth checking first to see which is best suited to you and what you want to achieve.

There are two different Sustainiac systems: the Stealth Pro and the Model C.

The Stealth Pro looks and acts like an active pickup until it is turned on and then becomes a magnetic string driver. It requires a battery to power it and is generally more practical than the model C.

It has 3 different modes: normal (also called ‘fundamental’), mix and harmonic. Normal is a straightforward sustain that most people think of when it comes to sustainers.

Harmonic changes the string vibration mode from fundamental to a high harmonic (3rd, 4th or 5th). And Mix combines the normal and harmonic modes to create a sound that is very similar to amp feedback.

The Sustainiac Stealth Pro can be found on some well known guitars like the Manson MBM-1, Ibanez RG60ALS, JS2480, JS240PS and lots of Schecter’s: The C-1, C-7, Sun Valley, Banshee’s, Reaper’s, Hellraiser’s and more.

The Model C is different in that it’s not installed like a pickup in the guitar. It attaches to the headstock and is an electroacoustic type of sustainer as opposed to the Stealth Pro which is electromagnetic.

It creates sustain that is identical to that which you would get from turning up your large amp very loud. Only it’s better and more controllable.

Unlike the Stealth Pro it needs a controller/floorbox to use it along with the string driver on the headstock.

Sustainiac’s website has a whole host of information about their products and sustain generally. It does need a major redesign though as it looks like something that was built in 1997! 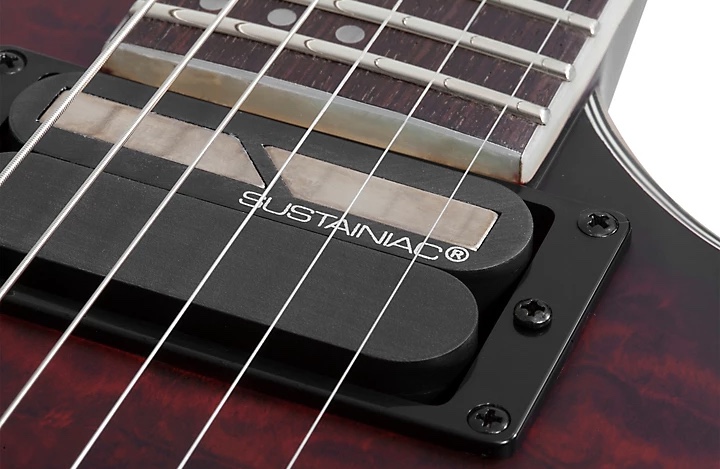 One of the advantages of the Fernandes (and Sustainiac) sustainer pickup systems, as mentioned earlier, is that you have the freedom to use the plectrum/pick. Having the pickup embedded within the guitar rather than an external device gives you the capability to play different strings, chords etc.

There are two Fernandes sustainer pickups – the Full and the Lite.

The Full does come with a few extra features that are like the Sustainiac Pro. It has 3 different modes that you can select: natural, harmonic and mix.

The natural mode is what you would expect from a sustainer – the notes continue to ring out until the sustainer is switched off or you mute the string. Harmonic makes the note you play go up until it reaches the 5th harmonic. And lastly the mix mode mixes the other 2 modes creating a harmonised type of feedback.

The Lite version doesn’t have the 3 different modes. You can just turn it on/off and adjust the intensity of the sustain.

Fernandes are a Japanese company and finding stores or places online that stock their guitars can be tricky (it’s easier to pick up a used one). Their sustainer kits are much simpler to find and can be bought from multiple retailers online.

Which is the Best Guitar Sustainer

Both the Sustainiac and Fernandes sustain systems are good. There are differences, as noted above, but both do a really good job and you’ll almost certainly be happy with either.

The Sustainiac pickups are probably the more commonly found system as they come preloaded in many Schecter and a few Ibanez guitars. If you want an easy way to try the Sustainiac then you can either buy one of the aforementioned guitars or get to a store and try one out. 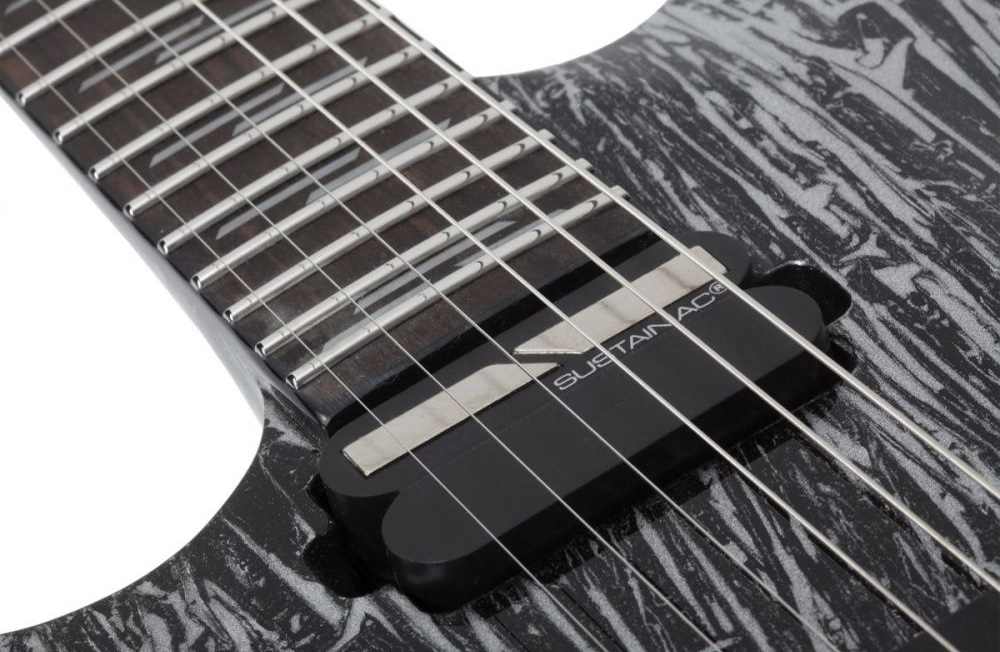 The Sustainiac has also been used by a lot of famous guitarists like Joe Satriani, Synyster Gates, Adrian Belew and more.

It’s a really great system and should absolutely satisfy your sustainer needs.

The extra features on the Fernandes sustainer are interesting and give you options to create more sounds. But unless you’re sure you want them then don’t make that a significant factor in your decision.

You can buy used Fernandes guitars for cheap that have the sustainer system built in. Whilst the guitar itself isn’t fantastic it’s an inexpensive way to try one out. You can then move the guitar on and either buy a better one with a sustainer or buy and install the system into one of your own guitars.

Can I Use a Compressor Instead of a Sustainer?

Sort of, although it’s not the same as using an actual sustainer. And In fact many people find a compressor to be disappointing when trying to get that everlasting sustain.

There’s certainly no harm in trying with a compressor, and the better the compressor the more likely it is to get closer to the sound you want to achieve. But realistically the only way to get that infinite sustain is with a proper sustainer.

The other option, and one that’s been used for decades, is to turn your amp up loud. And when I say loud, I mean really loud.

It’s pretty cool, but you do have to sacrifice your hearing to do it! Not a great alternative in the long run and getting a sustainer is a much better choice.

Guitar sustainers are pretty cool and not all that well known. But as this guide has shown they’ve been popular amongst legendary guitarists for years and are available for everyone to try.

If you’re interested in creating some I interesting and experimental sounds, or just getting huge amounts of sustain, then one of the different types of guitar sustainers might be just what you’re searching for.

3 thoughts on “Guitar Sustainers: Everything you Need to Know”