Drop tuning a guitar is fairly common. It’s a simple technique that can open up your playing and give you lots of varied options.

Standard tuning is great, obviously. But it can be fun and interesting to try different tunings and expand your sound. 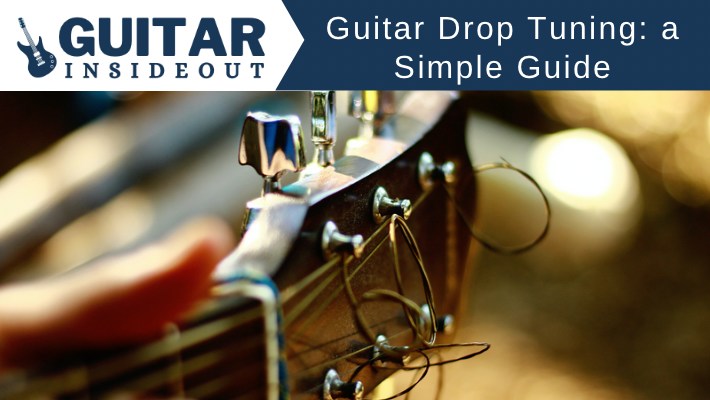 You’ll find a lot of heavier styles of music like metal and heavy rock use drop tunings, especially drop C and B. It helps create a more aggressive and low, deep sound that fits with that style of heavy music.

But it’s not limited to only those genres. For example Blues and slide guitar players also use drop tunings fairly regularly to help them achieve a desired sound.

I’ve far more experience with the heavier drop tunings rather than blues or slide if I’m honest! But I play a lot of drop D and drop C regularly and like to experiment with even lower tunings.

So if you’re not that familiar with drop tuning or don’t know how to tune your guitar down then we will look at what it is, how to do it and how it will give you more opportunities in your playing.

What is Drop Tuning?

Drop tuning a guitar is where you tune down and lower the pitch of the bottom string. You can tune all the strings down, dropping them by the same interval, but the most common way of doing it is to drop only the bottom string.

It’s a technique often used by heavy bands and actually makes playing these very aggressive, low sounding riffs fairly easy. When you drop the tuning of the low E string you can then play power chords with just one finger.

What Are the Different Drop Guitar Tunings?

The main drop tunings you will find are:

Something you might have noticed is that the name of tuning, like drop C, gives you the note the low E string needs to be tuned to. So with drop D the low E is tuned to D, drop C it’s tuned to C, drop B to B and so on.

Drop D is very simple because that’s all you have to do – tune the low E down to D. All the other strings are left as standard.

For the other drop tunings you need to tune down the rest of the strings, not just the low E. To do that you look at how many semitones the low E string is lower than D, and for every one of those you tune all the other strings down one semitone.

Let’s look more closely at how to drop tune.

How to Drop Tune: A Lesson

If you want to try dropping your guitars tuning then we will go through the most common drop tunings, including drop D, C, B and A.

So, how do you tune to drop D?

Well it’s extremely simple. Assuming your guitar is in standard tuning then all you have to do is tune the low E string down until it’s a D. If you’re using a tuning app, pedal or electronic tuner this will be very easy. 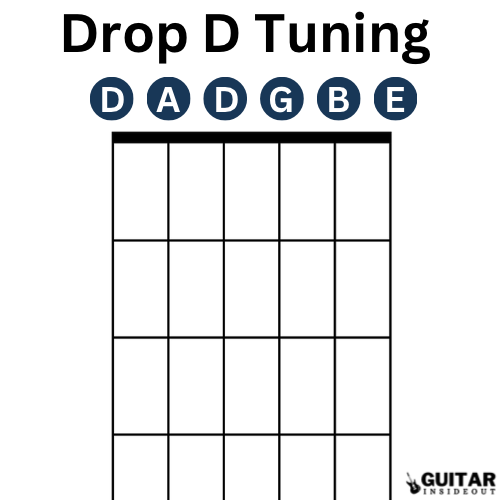 If you’re tuning by ear then you can match the low E string you’re tuning to D with the 4th string, which in standard tuning is a D itself. So pluck that D (4th string) as you are tuning down the low E until they match.

When I was first learning guitar a lot of the songs I picked up quickly were in drop D. Being able to just play power chords by barring the first 2 or 3 strings with one finger was ideal.

I loved pop punk back in the day and ‘Ocean Avenue’ by Yellowcard was a classic. The palm muted intro riff that then makes up the verses is a great example of drop D. Have a look at the tab below:

Drop C is used less than Drop D but is still very common, particularly in modern metal and heavy rock. Again it makes playing power chords much simpler and gives a very low and heavy sound.

If you’ve got a tuning app or pedal then it should have a drop C option. If you’re tuning by ear it’s still not too tricky – all you’re doing is dropping standard tuning of every string by a whole step (or 2 frets).

The strings are tuned to: 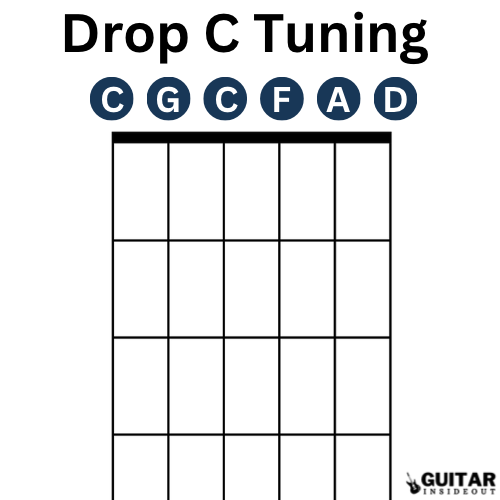 To tune by ear the best place to start is by being in standard tuning and then finding a C note on the fretboard. You can then use that as a reference to tune your low E string.

The easiest or closest C is found on the A string at the 3rd fret. That C will be an octave higher than C you want on the low E but the pitch is the same and you should be able to get close with this method.

Alternatively if you have access to a piano or keyboard you can play a C note on there and adjust the pitch on low E string until it matches.

Once you’ve tuned down the low E until it matches either the 3rd fretted A string or the C note on another instrument you can move onto the other strings.

It’s important to recheck after you’ve tuned every string as drop tunings reduces the tension so much. Go back over each string to make sure it’s tuned correctly.

Drop B is a pretty extreme tuning and used by some of the heaviest bands out there. Probably the most famous is Slipknot who play a lot of their songs in drop B.

The strings are tuned to: 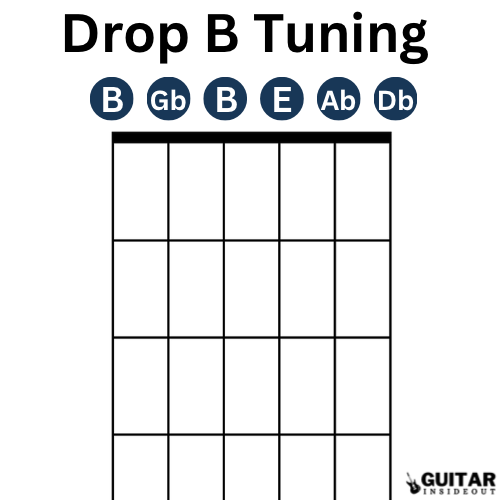 To tune to drop B by ear is very similar to the other drop tunings. So first you will want to be in standard tuning.

Find a B note on your fretboard, the easiest place is on the A string at the 2nd fret. Then tune the low E string down until it matches the fretted B note you’ve just found on the A string.

Once again if you can use a keyboard or piano then all you have to do is play a B note and match the pitch to the low E string as you tune it down. After you’ve done that you do the rest of the strings:

Drop A tuning is almost as low as you can go. It’s mostly used by extreme metal bands and on 7 strings guitars rather than regular 6 string guitars (although it can be).

If you are going to tune a 6 string to drop A you will need much thicker gauge strings than standard ones. 0.12 or greater is going to be necessary for such a low tuning.

With drop A the strings are tuned to: 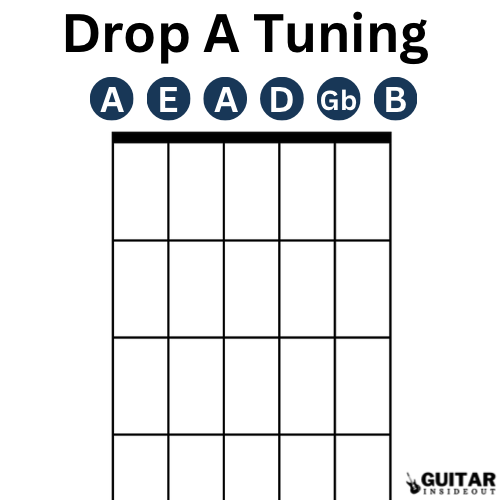 Tuning to drop A follows the same pattern as the other drop tunings we’ve been through.

Begin in standard tuning and locate an A note on your fretboard. Tune the low E string down until it matches that A note.

The rest of the strings are tuned as follows:

Why Are My Strings Loose or Floppy When Drop Tuning?

When you drop the tuning of your guitar you are loosening the tension on the strings. The lower you tune the looser the strings get.

When you get down to really low tunings like drop A you might find that the strings are so loose you can barely play them. This is even more likely if you are using standard or light gauge strings.

So don’t worry that you’ve damaged your guitar or anything like that. You can always tune back to standard or a higher tuning and you will find your strings return to their normal tension, i.e not floppy!

If you want to play in a lower tuning then you will probably want to get a thicker set of strings.

Do you Need Thicker Strings for Drop Tuning?

You don’t need thicker strings for drop tuning but it will definitely help. If you’re only playing in drop D then standard .10 gauge guitar strings will be fine.

If you’re playing in lower drop tunings, especially drop B or drop A, then realistically you will need to get a thicker gauge of string. If you do decide to switch to heavier strings then remember: they will be more difficult to play at first.

Ernie Ball ‘Not Even Slinky’ strings are a good option for trying out thicker gauges with lower tunings.

You’ll probably need some time to adjust and build up the strength needed in your fingers for playing thicker strings. But if you are playing a lot heavy music that requires those extreme drop tunings it’s worth it.

0.12 gauge is a good starting point for drop tunings. You can go thicker than that but it will be a big change from standard gauge 0.10’s and you may struggle with the difficulty and strength needed.

Does Drop Tuning Damage your Guitar?

No, drop tuning doesn’t damage your guitar in the slightest. In fact it has absolutely no effect on it whatsoever.

All you can do by lowering the tuning is potentially break your strings. But your guitar itself will be completely fine.